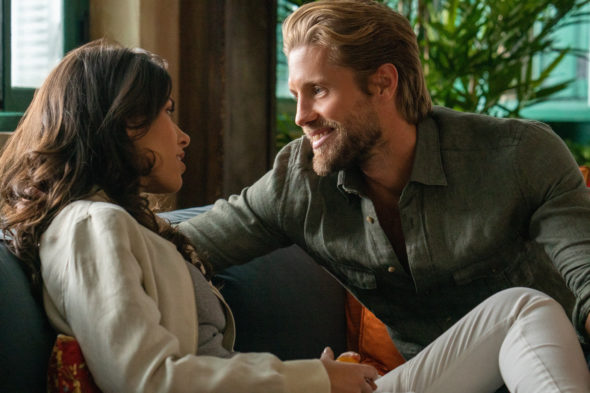 A Paramount+ action-adventure series, the Blood & Treasure TV show stars Matt Barr, Sofia Pernas, James Callis, Katia Winter, Michael James Shaw, Oded Fehr, Mark Gagliardi. The story centers on Danny McNamara (Barr), a former FBI agent who’s now a lawyer specializing in repatriating stolen art, and Lexi Vaziri (Pernas), a con woman and thief. She’s haunted by the tragic loss of her father, which she blames on Danny. When terrorist Karim Farouk (Fehr) absconds with a priceless artifact and kidnaps Danny’s mentor, Dr. Anna Castillo (Alicia Coppola), Danny recruits Lexi for help. As the duo travels the world, hot on the tail of their target, Danny and Lexi become embroiled in a 2,000-year-old battle for the cradle of civilization. In season two, following an attack on the Vatican, the duo set off to recover the Spirit Banner of Genghis Khan, a lost treasure of Asia.

What do you think? Which season two episodes of the Blood & Treasure TV series do you rate as wonderful, terrible, or somewhere between? Do you think that Blood & Treasure on Paramount+ should be cancelled or renewed for a third season? Don’t forget to vote, and share your thoughts, below.

Would like to watch this second season but cannot afford to pay additional money. All the extra charge options are getting ridiculous. People can’t afford the expense.

I would have liked to watch Season2 as I
loved season 1, but I already pay for cable to get paramount. I’m not paying extra