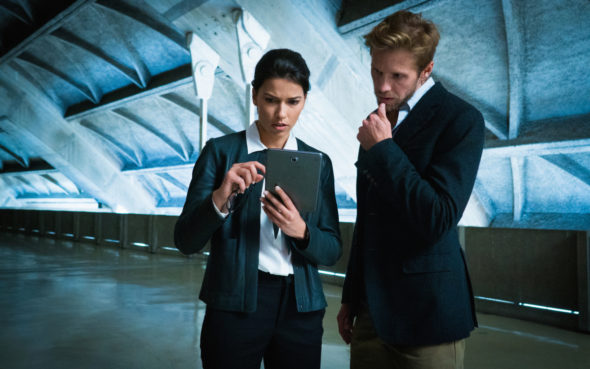 Is the first season of the Blood & Treasure TV show on CBS a real gem? As we all know, the Nielsen ratings typically play a big role in determining whether a TV show like Blood & Treasure is cancelled or renewed for season two. Unfortunately, most of us do not live in Nielsen households. Because many viewers feel frustration when their viewing habits and opinions aren’t considered, we’d like to offer you the chance to rate all of the Blood & Treasure season one episodes here. *Status update below.

What do you think? Which season one episodes of the Blood & Treasure TV series do you rate as wonderful, terrible, or somewhere between? Should CBS cancel or renew Blood & Treasure for a second season? Don’t forget to vote, and share your thoughts, below.

I will not pay amozone to watch, but I do want to see season 1 again and waiting for season 2

Never fails to get you hooked week to week I love the action, storyline, and exotic locations. Can’t wait for next season to get here.

Can’t wait for the next episode week to week. It just keeps you hooked in and wanting more. LIKED Sodia since The Brave glad to the the renewal notice. Which the brave should have gotten. Oh wellkeep up the great work.

Glad to see this program renewed.

Love this show its a Beautiful (Alexi Wow) twist on “It takes a Thief” meets Indiana Jones. Hope to see more of this show in future

Please renew the show, my wife and I thoroughly love watching it!

I think there should be a Season 2.. It is adventurous, and entertaining. It reminds me of the Indiana Jones Movies which I thoroughly enjoyed.

There really is not a lot of shows like this on TV. I like the characters and the plot line.
Looking forward to Season 2

I fully concur. My dance partner and I religiously have watched all episodes so far of Blood and Treasure. A light hearted action packed adventure with some good humor, love perhaps developing ❤, interesting sets, nice plot and good acting. Keeps our attention nicely paced. In today’s world, with all the ugly news we all hear and see every day, Blood and Treasures is a fun filled adventure to get out minds away from the ugliness and put our feet up and root for out heroes and heroine as they seek the terrorist who has Cleopatra’s sarcoficous and secrets. Please… Read more »

I am a lover of all that is Egyptian. I was very excited to watch this show but to start off with bombing the Giant Pyramids of Giza within the first minutes was an immediate turn off for me. Do you also know that a tour bus, just this week, was bombed right outside of the area of the Giant Pyramids? Very poor taste and timing for this show to air.