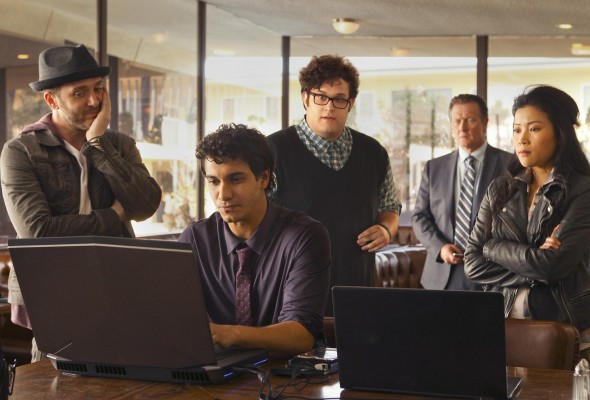 TV show description:
This dramatic TV show is based on the life of Walter O’Brien. O’Brien (played by Elyes Gabel) is a self-proclaimed computer expert and an eccentric genius. He and his team of brilliant misfits — the Scorpion team — comprise the last line of defense against complex, high-tech threats of the modern age — Homeland Security’s new think tank.

Toby Curtis (Eddie Kaye Thomas) is an expert behaviorist who can read anyone. Happy Quinn (Jadyn Wong) is a mechanical prodigy while Sylvester Dodd (Ari Stidham) is a statistics guru.

While this socially awkward group is comfortable with each other’s humor and quirks, life outside their circle confounds them. As a result, they rely on Paige Dineen (Katharine Hope McPhee) — who has a young, gifted son — to translate the world for them.

These nerdy masterminds have found the perfect job: a place where they can apply their exceptional brainpower to solve the nation’s crises. They also help each other learn how to fit in.

Series Finale:
Episode #93 — A Lie in the Sand
Team Scorpion heads to Northeast Africa where they must carefully navigate a minefield in order to save the lives of local villagers. Also, Paige and Walter’s relationship takes a shocking turn, and Toby and Happy make an important decision.
First aired: April 16, 2018.

What do you think? Do you like the Scorpion TV show? Do you think it should have been cancelled or renewed for a fifth season?

Please bring back Scorpion! If the network or actors don’t want to do a whole season 5 then at least do a tv movie follow up. So many shows are doing this now…Gilmore Girls, Psych, Breaking Bad & Prison Break…just to name a few. The series finale was left on a cliffhanger (so not fair to fans, BTW) I really hope they bring it back…to at least follow up and give these characters a proper ending with some closure.

Why can’t they bring back the show for a few episodes to end it better. They did it elementary finally after numerous complaints and urging from fans. Everyone just keep bugging CBS

I have posted multiple times about having a 5th season or at least close out episodes. I have decided NEVER to invest in CBS TV shows…. it is the network’s responsibility to bring these series to some type of ending not just a stoppage. If you want large scale viewership and investment… then we should expect a reasonable ending. Other networks manage to develop and plan better. Cbs dies not care… I am done and will not watch any of the new shows…because historically Cbs has NO follow through!

I enjoyed watching this program with my daughter. There wasn’t too many shows that we could watch together. Either they were to young for me or too old for her. This show was a perfect balance. It’s a shame it got cancelled. I hated the ending of this series! I would love another season, but I get it. I really wish they would do 1 or 2 episodes to follow up. Maybe a 2 hour series finale, finale. I understand why the writers did it. (Hoping that a cliffhanger would bring them back for another season). It just stinks that… Read more »

I just found episode one-plus of Scorpion on my TV. Of course they are all reruns but I have AT&T – Uverse TV channels and I found it’s on every Sunday in the morning on POP channel. Even if you go with another company, look up SCORPION and see if it’s playing in your area!! I enjoy the reruns also.

I loved this show and hated that it was cancelled! I printed a list off the net of all their shows. Over the course of reruns on other channels I have watched every show in squence! This show will and has been missed!

Just found out this was canceled – what a shame. All that is left are crappy shows, reality (fake), not-funny, etc shows. This was a wonderful departure to all that & we totally enjoyed it. We watch less & less network shows & just use amazon, netflix, etc & they wonder why they are losing audience & $. Sad

why when a program is clever it gets canceled not everybody , is tv only about sport and reality tv if it is i would like to thank the cancelers there going to save the planet and me a lot of money on my electric bill

This was a great show with excellent actors need more shows like this.

i could not agree more

Dear CBS,
If you’re reading this, now. Bring the cast of Scorpion back as guest stars in NCIS: Los Angeles, please.