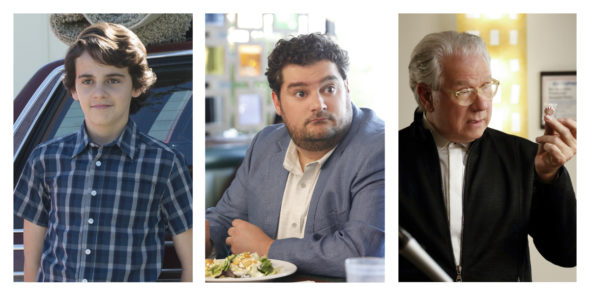 TV show description:
A comedy from creator Dan Kopelman, the Me, Myself & I TV show focuses on the defining moments in the life of Alex Riley. In 1991 Chicago, 14-year-old Alex (Grazer) is a fledgling inventor enjoying a pretty great life, including the Chicago Bulls’ first championship.

When Alex’s mother, Maggie (Maughan), marries a pilot named Ron (Unger), she and Alex take off for Los Angeles. Now he has to reinvent himself as he acclimates to a whole new school and his step-brother, Justin (Richards), never mind living in the heart of Lakers country. There is one balm to his uprooted existence — Nori Sterling (Caster) — the California girl of his dreams.

By 2017, 40-year-old Alex (Moynihan) is a bona fide entrepreneur living a great life, until his wife breaks up with him and threatens to take their daughter, Abby (Gray), with her. It takes the help of his business partner, Darryl (White), to keep him from spiraling out of control.

Now 65 years old, in 2042, Alex (Larroquette) survives a minor heart attack. During his recovery, he decides to reinvent himself, all over again. His grown daughter, Abby (Coleman), now manages the Bulls, and is surprised when her dad announces his retirement. That surprise pales though, in comparison to Alex’s chance meeting with Nori, who now goes by Eleanor (Lawrence). At this new stage of life, Alex decides to try to reestablish their connection.

No matter his age or circumstances, Alex always resolves to move forward in his life. His secret recipe includes determination, heart, and humor.

Series Finale:
Episode #13 — There She Goes
Mid-life Alex contemplates getting back together with his ex-wife, Sarah (Allison Tolman), when she visits for Abby’s birthday party. Also, Young Alex attempts to move on from his crush on Nori by inviting his lab partner, Julia (Cree Cicchino), to the dance, and Older Alex makes one last-ditch effort to keep Eleanor from leaving Los Angeles with her fiancé.
First aired: July 21, 2018.

What do you think? Do you like the Me, Myself & I TV series? Should this TV show have been cancelled or renewed for a second season on CBS?

We loved this show also. Hard to believe they would canceled it. I guess not enough foul langues & sex. It brought back lots of memories we could relate to.

I LOVED this show. It is clever and well written. Far superior to half the stuff on network TV. The stars, without exception, were well suited for their roles. I actually looked forward to watching it each week – set my DVR just in case. Very disappointed in the cancellation.

I like this movie. I can’t believe this show was cancelled!!!!!!