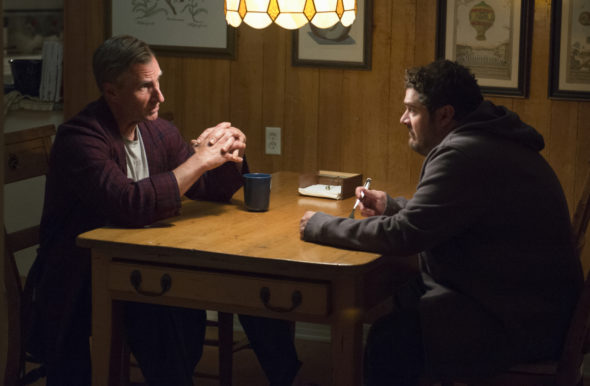 How well does Alex adapt to major life changes in season one of the Me, Myself & I TV show on CBS? As we all know, the Nielsen ratings typically play a big role in determining whether a TV show like Me, Myself & I is cancelled or renewed for a second season. Unfortunately, most of us do not live in Nielsen households. Because many viewers feel frustrated that their viewing habits and opinions aren’t considered, we’d like to offer you the chance to rate all the season one episodes of Me, Myself & I for us here.

A CBS sitcom, Me, Myself & I stars stars Bobby Moynihan, Jack Dylan Grazer, Brian Unger, Jaleel White, Kelen Coleman, Christopher Paul Richards, Mandell Maughan, Skylar Gray, Reylynn Caster, Sharon Lawrence, and John Larroquette. The comedy centers on the defining moments of Alex Riley’s life. In 1991, Alex (Grazer) is a 14-year-old transplant from Chicago to L.A. In present day, at age 40, his wife has left him, and Alex (Moynihan) wants to maintain his relationship with his daughter. By 2042, in the wake of a mild heart attack, 65-year-old Alex (Larroquette) is ready to retire and start anew — yet again.

What do you think? Which season one episodes of the Me, Myself & I TV series do you rate as wonderful, terrible, or somewhere between? Should CBS cancel or renew Me, Myself & I  for a second season? Don’t forget to vote, and share your thoughts, below.

This show (MM+I) is really a delight! So much of what’s on now is so bad that I turn the TV OFF until something I like comes on -usually at 10 pm. I actually set my timer to WATCH MM+I .