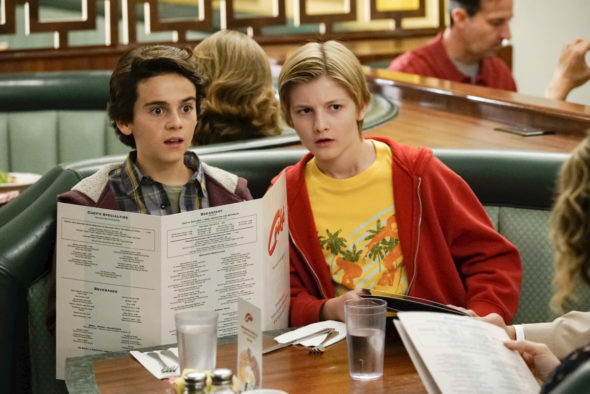 How many times can Alex reinvent himself? Has the Me, Myself & I TV show been cancelled or renewed for a second season on CBS? The television vulture is watching all the latest TV cancellation and renewal news, so this page is the place to track the status of Me, Myself & I, season two. Bookmark it, or subscribe for the latest updates. Remember, the television vulture is watching your shows. Are you?

Airing on the CBS television network, Me, Myself & I stars Bobby Moynihan, Jack Dylan Grazer, Brian Unger, Jaleel White, Kelen Coleman, Christopher Paul Richards, Mandell Maughan, Skylar Gray, Reylynn Caster, Sharon Lawrence, and John Larroquette. The sitcom focuses on the defining moments in the life of Alex Riley. In 1991, Alex (Grazer) is a 14-year-old transplant from Chicago to L.A. In 2017, at age 40, his wife has left him, and Alex (Moynihan) wants to maintain his relationship with his daughter. By 2042, in the wake of a mild heart attack, 65-year-old Alex (Larroquette) is ready to retire and start anew — yet again.

The first season of Me, Myself & I averaged a 0.57 rating in the 18-49 demographic and 2.89 million viewers. Find out how Me, Myself & I stacks up against the other CBS TV shows.

Although it premiered with decent ratings, the numbers for Me, Myself & I have been seeing sizable declines. CBS has high standards for their comedies so I’m thinking this one may not survive to see a second season. I’ll update this page with breaking developments, so subscribe for free updates on any Me, Myself & I cancellation and renewal news.
11/1/17 update: As of now, it seems Me, Myself & I has been cancelled. CBS has removed it from the schedule, but will reportedly finish production on season one. Details here.

Me, Myself & I Cancellation & Renewal Related Links


What do you think? Were you hoping that the Me, Myself & I TV show would be renewed for a second season? Are you disappointed that CBS has cancelled this TV series, instead?

Bring it back! You have a gem here, CBS. Great writing, imaginative, excellent acting. A terrific show that deserves to continue on.

I am glad u understand