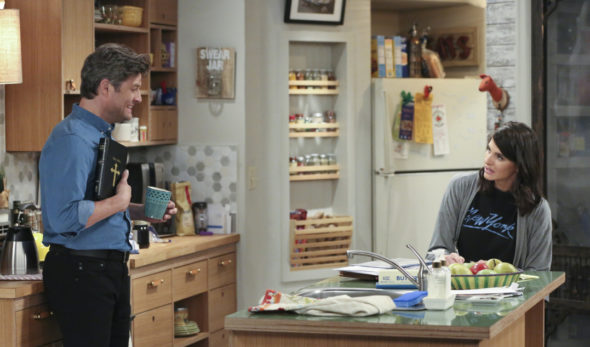 TV show description:
From creator Patrick Walsh, the Living Biblically TV show is inspired by the AJ Jacobs book, The Year of Living Biblically. The sitcom centers on Chip Curry (Ferguson), a film critic for an NYC newspaper. After the death of his best friend, Chip decides to live a better life, through strict adherence to biblical precepts.

Chip has always had obsessive tendencies. Luckily his pregnant wife, Leslie (Kraft) is a smart cookie. Although she’s highly skeptical, she finds Chip’s newest passion amusing and gives him her full support.

Realizing he’ll need some guidance along his new path, Chip enlists the help of a Catholic priest, Father Gene (Gomez), and the Father’s best friend, Rabbi Gil Abelman (Krumholtz). As his “God Squad,” they listen to him, offer advice, and generally help Chip render a contemporary course of action from the Bible’s ancient instructions.

At the paper, Chip’s boss, Ms. Meadows (Manheim), is surprisingly supportive of his new project — largely because she knows the story he ultimately writes about it will sell. Similarly, his co-worker and friend, Vince (Rock) is happy to give him a reality check when necessary. Like Leslie, Vince finds the entire enterprise entertaining.

As Chip sets out on his earnest, spiritual journey, he is grateful for the support of his near and dear. Still, he can’t help but wonder if the results will be of “Biblical proportions.”

Series Finale:
Episode #13 — David and Goliath
Chip decides to take on his corporate bosses after he is fired trying to get a recently-fired Ms. Meadows re-hired. (Courtesy of CBS)
First aired: July 21, 2018.

What do you think? Do you like the Living Biblically TV series? Should this CBS TV show have been cancelled or renewed for a second season?

My wife and I really enjoyed the show, the fun, clean humor and struggles with our baser tendencies in a humorous way. It was a show that we could have our daughter watch with us, which is becoming all too rare these days.

I actually turned on Network TV after 3 years just to watch Living Biblically; typical fashion of mainstream the show was cancelled. If it or another show like it appears in the near future it could be more closely related, church functions & characters. With all our many crazy, serious, funny, loving personalities we have one common goal- followers of Jesus
Christ.

How sad that Hollywood would choose again to cancel a clean interesting show. Even tho at times it bordered on the sacrilege, it was different. We all know that Hollywood is not about what people want, but about the outlandish, disrespectful, inappropriate and shocking. That’s why I don’t watch tv, and haven’t for ten years now. I choose through my tablet what I watch

I thought that show was very refreshing.. Of course it was cancelled- it was clean and actually had some substance.

I loved watching this show!! It was good, clean fun and something to look forward to Monday evenings