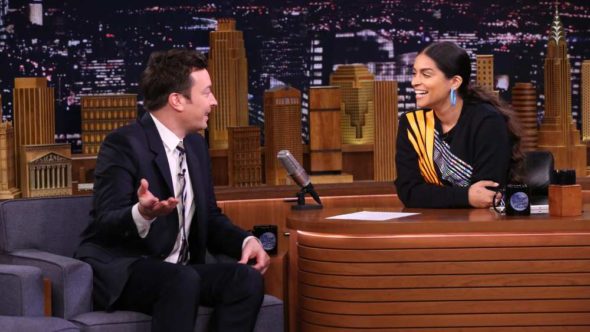 Lilly Singh is coming to late night! NBC just announced the YouTube star will take over Carson Daly’s spot with her new TV show, A Little Late with Lilly Singh.

The late-night talk show will see Singh “conduct in-studio interviews as well as create and star in pre-taped comedy sketches and signature segments.”

A Little Late with Lilly Singh is set to debut on NBC in September.

Watch the announcement and read more info below:

UNIVERSAL CITY, Calif. – March 14, 2019 – NBC, which has been television’s late-night leader for more than 60 years, is adding to its already illustrious legacy with “A Little Late with Lilly Singh,” making her the only woman to currently host a late-night talk show on a Big 4 network.

Set to air at 1:35 a.m. and debuting in September (exact date to be announced), “A Little Late with Lilly Singh” will be a half-hour program with an array of guests. Singh will conduct in-studio interviews as well as create and star in pre-taped comedy sketches and signature segments.

“An Indian-Canadian woman with her own late night show? Now that is a dream come true,” Singh said. “I’m thrilled to bring it to life on NBC, and I hope my parents consider this to be as exciting as a grandchild.”

“Lilly is truly a star and we’re thrilled to welcome her to our NBC family,” said Doug Vaughan, Executive Vice President, Special Programs and Late Night, NBC Entertainment. “She is a multi-talented performer who will surely have a great rapport with not only all her guests but also with our devoted late-night audience. We can’t wait to get started.”

Singh is a multi-faceted entertainer, finding success as an actress, producer, writer and creator. She’s a leading force in the digital world  amassing a global audience  of more than 14  million subscribers on her  YouTube channel, where she writes, produces  and stars in  comedic and inspirational  videos.

As an actress, she  appeared in the Emmy Award-nominated HBO film “Fahrenheit 451,” opposite Michael Shannon and Michael B. Jordan.  She also appeared in the films  “Bad Moms” and “Ice Age: Collision Course.”

Singh  is the New York Times  bestselling author of “How to Be a Bawse: A Guide to Conquering Life.” She has appeared on Forbes’ 30 Under 30 Hollywood & Entertainment list, Fast Company’s Most Creative People list and Time called her one of the most influential people on the Internet.

“A Little Late with Lilly Singh” will be produced by Universal Television and Unicorn Island Productions. Singh will executive produce and Polly Auritt will co-executive produce.”

What do you think? Are you a fan of Lilly Singh? Will you watch her new TV show?