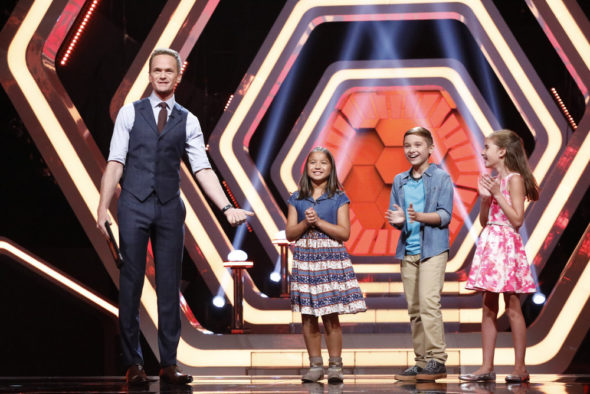 How long will Neil Patrick Harris stick with the Peacock Network? Has the Genius Junior TV show been cancelled or renewed for a second season on NBC? The television vulture is watching all the latest cancellation and renewal news, so this page is the place to track the status of Genius Junior, season two. Bookmark it, or subscribe for the latest updates. Remember, the television vulture is watching your shows. Are you?

An NBC game show featuring contestants between the ages of eight and 12, Genius Junior is hosted by Neil Patrick Harris. The TV series showcases incredibly bright children facing off against each other and the clock. As the game unfolds, they compete to solve increasingly difficult quizzes. Subjects range from geography, math, and spelling, to feats of memory, and more. At the end of each episode, that week’s winning team gets to face “The Cortex,” a tough intelligence test which provides the players with the opportunity to build up their prize fund. The winning team leaves with a “Genius Junior” grant, to help them prepare for their future.

The first season of Genius Junior averaged a 0.64 rating in the 18-49 demographic and 3.60 million viewers. Find out how Genius Junior stacks up against other NBC TV shows.

Will NBC cancel or renew Genius Junior for season two? Though the ratings haven’t been very good, my gut tells me that it could still get a second season. Realistically, I think it will be cancelled. I’ll update this page with breaking developments. Subscribe for free Genius Junior cancellation or renewal alerts.

What do you think? Should NBC cancel or renew its Genius Junior TV series for season two? How long do you think this game show could run?

Do it cancel! Please!!

Yes! Renew Genius Junior. My 8 year old (and I) loves it and pushes her to do better!

This show was so good that I wanted it to be renewed. In fact, I had a dream that it was going to be renewed. So please renew this show for a second season.

Please, please, PLEASE renew Genius Junior! I have been deprived since May!!!! There has to be another season!

I loved this show. It’s better than anything else on TV. Please renew!

Please renew Genius Junior. This program truly gave me hope for the future. I had so many people hooked on it. PLEASE BRING IT BACK!!!!!!!

This show is AMAZING and MUST BE RENEWED!!

We hope for a second season.. these kids are amazing. My family loves it, watched every episode no half naked people with filthy words no one eating bugs . Just great showing of gods little miracles . Mr. Patrick we hope to see you next season.

This is the best thing NBC has going, and such a refreshing change of pace from the massive mounds of dreck on pretty much every channel. These kids are phenomenally gifted, check them out.

Please renew it. Little Geniuses is a great way to showcase the things that good kids are doing. Too much TV shows the troublemakers anymore