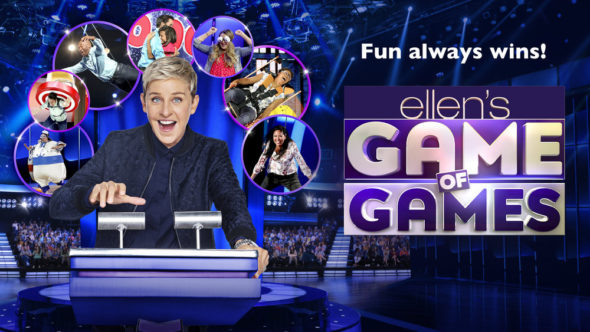 In its freshman year, the Ellen’s Game of Games TV show was a top-three series for NBC (right behind This Is Us and The Voice). Now that the novelty has worn off, will the audience still be game for more fun with host Ellen DeGeneres, or has the concept gotten gamey? Will Ellen’s Game of Games be cancelled or renewed for season three? Stay tuned. *Status update below.

A comedic NBC game show, Ellen’s Game of Games selects the competitors from the audience for a potential four rounds and the chance to win cash prizes. They try their hands at “Blindfolded Musical Chairs,” “Dizzy Dash,” and “Scary Go Round,” as well as other contests. To advance to play “Know or Go,” a player must win in a given round. The one who makes it all the way to the final round ultimately gets the chance to play “Hot Hands,” in which they have to supply correct answers to questions in a set amount of time.

4/3 update: You can see the latest night’s ratings in context.

For comparisons: The first season of Ellen’s Game of Games on NBC averaged a 2.00 rating in the 18-49 year old demographic and 8.057 million viewers.

What do you think? Do you like the Ellen’s Game of Games TV series? Should this NBC TV show be renewed for a third season?