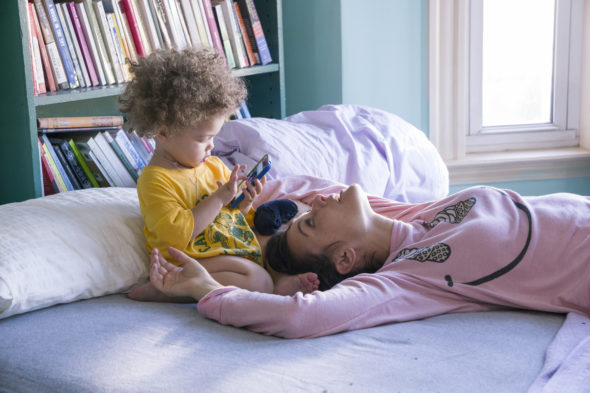 How does Bridgette do balancing work and her personal life with bringing up Larry Bird, during the first season of the SMILF TV show on Showtime? As we all know, the Nielsen ratings typically play a big role in determining whether a TV show like SMILF is cancelled or renewed for season two. Unfortunately, most of us do not live in Nielsen households. Because many viewers feel frustration when their viewing habits and opinions aren’t considered, we’d like to offer you the chance to rate all the SMILF season one episodes here.

A semi-autobiographical Showtime dark comedy, SMILF stars creator, writer, and director Frankie Shaw, with Rosie O’Donnell and Miguel Gomez. The cast also includes Anna Chanel Reimer, Alexandra Mary Reimer, Samara Weaving, Connie Britton, Blake Clark, Raven Goodwin, Kimberly Crossman, Mark Webber, and Mia Kaplan. The story centers on Bridgette Bird (Shaw), a working class, South Boston single mother. Although she is striving to provide a better beginning for her son (played by the Reimer twins), Larry Bird (named for the former Boston Celtics player), she still has to do some growing up of her own.

What do you think? Which season one episodes of the SMILF TV series do you rate as wonderful, terrible, or somewhere between? Should showtime cancel or renew SMILF for a second season? Don’t forget to vote, and share your thoughts, below.