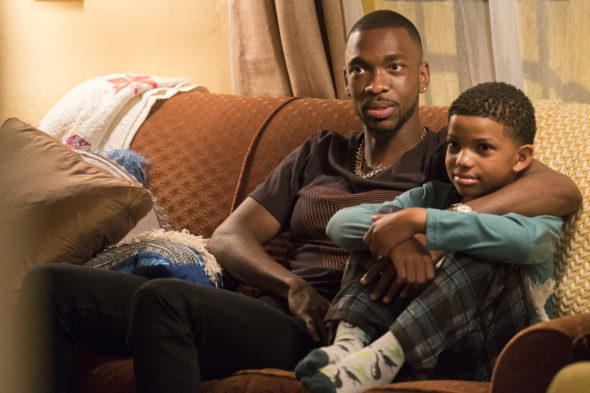 TV show description:
The White Famous TV show is inspired by Jamie Foxx’s own adventures as an actor, comedian, and musician, as he was establishing himself in show business. The story centers on a young, talented African-American comedian, Floyd Mooney (Pharoah).

Floyd’s standup career is on a serious upswing. His act is catching on so well, he’s starting to cross over. His fanbase is expanding so fast, he’s on the brink of becoming “white famous.” Now, he’s faced with a new challenge — maintaining his credibility without hindering the growth of his career.

Sadie (Coleman) is the love of Floyd’s wife and the mother of his son, Trent (Chavis). Although she got involved with someone else, while he was away, Floyd still has feelings with her. Relationship tensions aside, they have to find a way to parent their young child.

Malcolm (Ambudkar) is an ambitious agent. He’s more concerned with Floyd making it big than holding onto any “street cred.” He’s rather frustrated when his client hesitates to do whatever it takes to make it big. Meanwhile, Floyd’s friend, Ron Balls (Ming-Trent), has career and relationship challenges of his own.

Series Finale:
Episode #10 — Zero F**ks Given
Life comes full-circle for Floyd as career opportunities rain down following the release of yet another viral video. While Floyd deliberates over which path is the best for him, Sadie entertains a weighty offer of her own and Balls takes a chance on love.
First aired: December 10, 2017.

What do you think? Do you like the White Famous TV series? Should this TV show have been cancelled or renewed for a second season on Showtime?

I liked White Famous. Was one of my favorite new shows. Good mixture of humor and raw drama. Sucks it got canceled. It reminded me of Californication. Maybe with more sex and drug usage it would of made it.

This show has real possibilities – sorry to see it cancelled- Pharoah is great as are a few of the others.. they need to give it some room to find it’s legs… mistake to axe it

Is the adult on the sofa a man with boobs or a women with a moustache and beard?