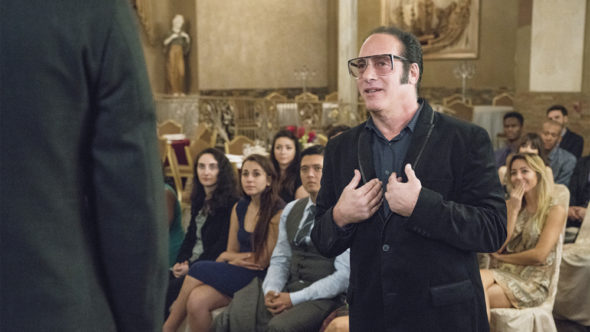 It’s a goodbye for Dice. Deadline reports Showtime has cancelled the TV show after two seasons.

It’s hardly surprising that Showtime has cancelled Dice. The series has brought in low ratings since it premiered in 2016. Season two, which wrapped in October 2017, earned a .03 rating in the 18-49 demo and only 146,000 viewers.

What do you think? Have you seen Dice? Would you have watched a third season?

Loved the show! Yes on a third season

Did not realize this show was cancelled. I thought it was great. Was really impressed with Dice’s acting ability (Who knew he could act?) and the supporting cast was gold.

Dice was a good show. Good character development. The shows that remain forever mostly not good. Wish show could be renewed. Didn’t know I could be as detailed in my response as Craig. However, he’s said it best. This was a funny show. period. No one did know the show was on because if Dice’s diehard fans had been aware the show existed, they would have have watched. I only realized of its existence going through On Demand for something to watch. May Dice return in a similar series late night on an easier to find channel. This isn’t right.

I’ve seen all episodes of “Dice” on Showtime and it is a really really funny show. I honestly cant believe that it is being cancelled because even if you’re not a fan of Andrew “Dice” Clay’s stand up routine, this show has a solid cast of characters – regular – and guest’s included. The writing, the story lines, and the characters are all extremely well done and funny as hell. It is my theory that this show was received with low ratings because either people thought that it would either be too raunchy, or would have been a low budget… Read more »

The show was very funny. I looked forward to watching it on Sunday nights. Showtime didn’t give the show a chance. Bad decision on Showtime’s part to cancel this show. Hope they reconsider.

I will never watch a showtime anything due this cancellation. This show was hilarious. Any ratings failures could be attributed to poor promotion and marketing. It was the best. I will enjoy the reruns on my Amazon for a long time to come.

I agree. I’m boycotting showtime also because this show was hilarious. And they did put good writing together and a funny show with good guest characters acting in the show but they should have made it an hour long show with A LOT more episodes than 6 per season. They need to bring it back on the air with 20-24 episodes that are an hour long. One of the funniest shows ever.

Great show! Definitely needed more promotion. I didn’t even hear about it until season 2, then binge watched both seasons. Bring back Dice for another season

I thought Dice was a great show. Very funny and entertaining. Very disappointed for the cancellation. Perhaps Showtime did not promote the show enough. Hope there is a change to renew.

this show was great I am very disappointed \

I like the show,and would watch a third season. It is a funny show!

Agreed. This show was hilarious. Nothing for us older folks who ain’t watching the same SH*T as everyone else. I really feel like a dinosaur now,

WHO THE EF WANTS TO SEE KARDASHIAN ADVENTURES IN HAIRCUTS AND VAPID FRONTIERS? IT IS APPALLING THAT TALENTLESS PEOPLE HAVE MADE MILLIONS APPEALING TO A STUPID, STUPID, STUPID, SUPERFICIAL AUDIENCE.