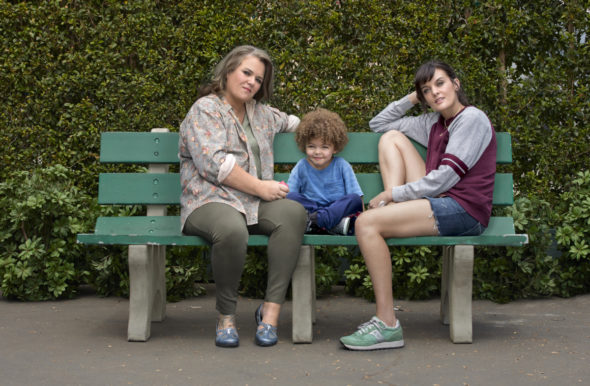 TV show description:
A dark, semi-autobiographical comedy from creator, writer, director and star Frankie Shaw, the SMILF TV show centers on Bridgette Bird (Shaw), a working class, South Boston single mother. Although she is striving to provide a better beginning for her son, Larry Bird (named for the former Boston Celtics player), she still has to do some growing up of her own.

That dysfunctional family begins with Bridgette’s mother, Tutu (O’Donnell). While she isn’t shy about yearning for “the way things used to be,” Tutu’s own past is not without its traumas.

Then there’s Raffi (Gomez). Kind and empathetic, this recovering addict and Bridgette do their best to maintain a healthy co-parenting relationship for Larry Bird’s sake. Rafi does have his drawbacks, including his penchant for “get-rich-quick schemes,” not to mention his active love life.

What do you think? Do you like the SMILF TV series? Should this Showtime TV show have been cancelled or renewed for a third season?

I really hope that Showtime reconsider their decision about SMILF. I looked forward to seeing it on Sunday nights. One bad apple should not spoiled the bunch. PLEASE reconsider

So much fun, adding to my favorites!

My wife and I like SMILF. Good scripts; great acting; refreshing! We hope it gets renewed for several seasons.

Worst attempt at comedy ever done in a television series.

Really enjoyed even though somewhat quirky