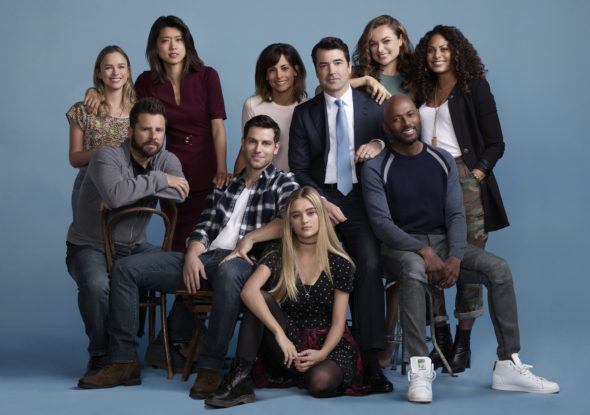 TV show description:
Friendship isn’t a big thing — it’s a million little things, according to the premise of the A Million Little Things TV show from creator DJ Nash. The contemporary serial drama centers on a group of friends, who first came together in an apparently random way.

Set in Boston, the series opens with Eddie Saville (Giuntoli) planning to leave his wife, Katherine (Park), for his lover; Jon Dixon (Livingston) trying to close a deal; Gary Mendez (Roday) waiting to learn if his breast cancer has returned; and Rome Howard (Malco) in the process of killing himself by overdosing on prescription medication.

Gary interrupts Rome’s plans when he calls to inform him Jon has committed suicide. The show then flashes back to seemingly happier times, just a week prior, with the four guys at the Boston Bruins’ opening game. As the story unfolds, before, during, and after Jon’s funeral, we learn the guys aren’t old school chums. They met when they got stuck in an elevator, a decade prior.

As the talker of the group, Jon drew all the guys out of their shells, and after discovering their shared love of the Bruins, convinced them to go in on season tickets. Since their unusual beginning, Jon had been the gang’s heart and soul and had a profound effect on their lives. Now they must learn how to go on without him.

As everyone processes this loss, their grief intertwines with guilt. Feeling bitter, Gary, who just got involved with Maggie Bloom (Miller) from his cancer support group, suggests that their friendship, while long-lasting, is ultimately shallow and probably insignificant to their lives.

Eddie, who has told his friends that he’s in love with another woman and wants to divorce his wife, insists this is not true for him. As the other guys know, it is Jon who helped Eddie to get sober seven years ago, after the birth of his and Katherine’s son, Theo (Byon). What they don’t know, is that the woman Eddie’s in love with is Delilah Dixon (Szostak), Jon’s widow and the mother of his two children, Sophie (Greene) and Danny (Hurstfield).

When Rome reveals he was in the process of ending his own life when Gary called to tell him about Jon, the guys start to get to an honest place with each other. They have miles to go though, and they may not get there.

Meanwhile, Delilah has taken Rome’s wife, Regina (Moses), and Gary’s date, Maggie, to the restaurant space Jon secretly secured on Regina’s behalf, as part of his final deal. While she’s celebrating her husband’s generosity, on the inside Delilah is riddled with guilt and wonders if Jon knew about her affair with Eddie.

The restaurant space wasn’t the only thing Jon was keeping under wraps. His assistant, Ashley (Ochoa), is hiding the folder he left for Delilah and has deleted files labeled “Rutledge” from his office computer.

Despite their secrets and shame, there is a lot of love in this group of friends, but there’s sorrow too, as there was before Jon’s untimely passing. Although some have achieved professional and personal success, others are struggling, and in some way, they all feel stuck.

Will Jon’s death wake them up to the fact that they must truly start living? Can these friendships help them save them from themselves? Stay tuned.

What do you think? Do you like the A Million Little Things TV series? Should this ABC TV show be cancelled or renewed for another season?

Love this show. Its current and wholesome. RENEW!!!!!

Renew!! Its one of the best shows still on and is still interesting! Love all the characters.

a million little things should be renewed!!

I have been a big fan of A million little things. However, the second to last episode has me with one foot out the door. We go to tv shows to get away from the politics, and now they want to bring in BLM??? Of all things. A domestic terror organization. Stay woke…lose viewers.

A Million Little Things should definitely be renewed! It has a wonderful story line with the actors being great! There are very few programs on that are worth watching, however this is one. The time that it is on goes so fast! The only negative is that the
“season” broadcasting is so short, with the gaps in between inconsistent and way to long. Please run each season longer, with less time between the seasons. Love the show!!

There are a million reasons why “A Million Little Things” is a top-rated, awesome and gut-wrenching drama series. The incredible acting, the character portrayed by the exceptional actors, the outstanding story lines make me want to be part of their wonderful family. Would like to see more of PJ and his parents brought back into the story line. I just binged-watched this series on Hulu, and now I can’t wait for the 6th episode of Season 3. Kudos to everyone involved in making this incredible drama series.

Please bring back the series A Million Little Things. LOVE this show. Myself and about 10 of my friends from all over the US really look forward to this show and talking about it. It is like a modern day version of St. Elmo’s Fire. Please renew it!