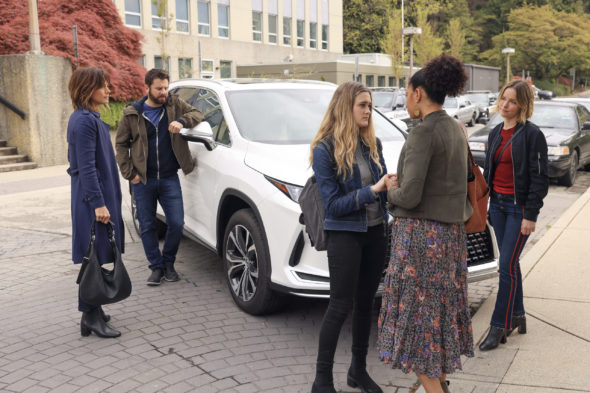 A Million Little Things ended its third season earlier this week. The ABC drama has already been renewed for a fourth season, and there will be more episodes next season. Instead of the usual 18 episodes, fans will see 20 episodes during the upcoming 2021-22 season.

Series creator DJ Nash said the following about the episode order, per Deadline:

“We’re doing 20 episodes this year. It’s the biggest season we’ve ever had. With us getting a 20-episode order, it doesn’t feel like that ABC wants this to be our last season.”

Nash also teased some about what fans can expect in season four, per Deadline. He said the following:

“Well, certainly, we have what happened behind that door. We’re also following whether or not this family moves to France and if some of them do and some of them don’t and what’s the fallout of how that affects this family. We have the mystery of how did what happened to Peter affect what happens with Gary and Darcy, moving forward. We left the season with Maggie also aware that Gary wasn’t where he was supposed to be, and so, we’ll see how her awareness might affect the story.

We’re also seeing Maggie, who’s found her voice in this podcast, gain some notoriety, and that story is a story we’re tracking next season that has some very funny and fun actors, who are fans of our show, joining our series that we’re excited about, and then, finally, for Rome, his documentary is picking up, and we’ll see him have incredible success. We’re telling that story, and for Regina, her figuring out what the next chapter of her life is going to be and her relying on her friends, who have had to face similar questions, for support and love as she finds that next chapter. That will involve a return of some people who have been in our series before that we have been excited to come back.”

A premiere date for season four of A Million Little Things has not been set but we do know it will air on Wednesday nights this fall.

What do you think? Are you excited about seeing more of A Million Little Things next season on ABC?

I love this show and can’t wait for next season. There are so many twists and turns, and I hope this show lasts for many years!

I love this show! Have from the beginning. In some ways, I like it better than NBC’s This Is Us. But I wish they didnt feel like they needed to show the George Floyd killing. We all had to deal with it in real life. Didny appreciate being reminded of it all. Scripted TV should be entertaining. I watch it to escape from reality. And I do agree with Peggy.

I like the show, I don’t like some of the things that have happened, I don’t agree with it all .

Love everything about this show! Based on the way they left us hanging I can’t wait for it to return!!

Cannot believe how this show pulls me in each week. Have been a huge fan since season 1 episode 1. Was a bit surprised to see the show turned a bit political. I was hoping the writers would have stayed away from the whole Floyd fiasco or at least told the story of his life- a drug addict, passing counterfeit money and a thief with a huge criminal record- trouble on our streets who did not deserve to die the way he did but did not belong on this side of jail bars

I loved this until it got into the racial stuff. I don’t agree with any of it. Now I fast forward until it is passed. Why do they never bring up Floyd was criminal, drug addict. They are making him a hero for their young black boys to look up to. His death was definitely wrong but so was his life that led him to that place

Love A Million Little Things! Great cast! so glad it is coming back I hope it runs for many more seasons.

Great to see it will be returning – love this show!

Big fan of this series. So glad for the next season.

I love A MILLION LITTLE THINGS and am happy it’s returning in the fall!
Very realistic and at the same time, very entertaining!

Gary was pretty careless when he showed up at Pedo Petey’s house. Don’t even think he was wearing gloves. Yeah, I was hoping he sent that pedo down here to Hell, because my dragons need a new chew toy. But he should have been wearing gloves at least. Especially after his dad helped him set up an alibi, without Gary even asking him.

You can bet your soul that somebody’s going to show up to “help” Gary. Hopefully they’ll help him clean up his tracks at the “crime scene” and NOT stop him from taking out the sick pedo Petey.

I LOVE A MILLION LITTLE THINGS!!! Cannot wait till it starts up in the Fall ! This show pertains to what is going on in the world . Love how it brings up suicide, racism, betrayal, gay community, love, togetherness! So true to life! Love it