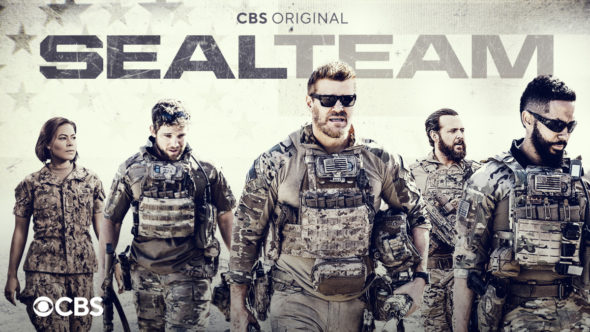 A military action-adventure series, SEAL Team is typically a middle-of-the-road performer when it comes to the ratings. Will that be enough for CBS to want to keep it on the air? Will SEAL Team be cancelled or renewed for season five? Stay tuned.  *Status Update Below.

SEAL Team stars David Boreanaz, Max Thieriot, Neil Brown Jr., AJ Buckley, and Toni Trucks, with Justin Melnick, Tyler Grey, Scott Foxx, and Judd Lormand in recurring roles. The drama series centers on an exclusive Navy SEAL unit as they train for, plan, and risk their very lives to carry out perilous missions for the sake and honor of their country. Fierce and focused Jason Hayes (Boreanaz) leads the Tier One team. Despite the hardship it causes them and their families, this SEAL team is ready, willing, and able to embark upon secret missions at the drop of a hat. Team members include Jason’s trusted confidant, Ray Perry (Brown Jr.); loyal yet self-destructive Sonny Quinn (Buckley); and young Clay Spenser (Thieriot), a multilingual and second-generation SEAL. Others who are vital to the team’s success are no-nonsense Ensign Lisa Davis (Trucks) and troop commander Lt. Cdr. Eric Blackburn (Lormand).

For comparisons: Season three of SEAL Team on CBS averaged a 0.66 rating in the 18-49 demographic and 4.92 million viewers.

What do you think? Do you like the SEAL Team TV series on CBS? Should it be cancelled or renewed for a fifth season?

If they don’t put it on Broadcast Tv how do they expect to get good ratings? I’m not paying to watch it.

Love seal team.loyal fan. Unlike CBS who moved the series to prime plus. I alreafy pay close to $300 a month for cable. I WILL NOT PAY 4.99 A MONTH TO WATCH SEAL TEAM ON PRIME PLUS

Great season look forward every week finished watch this season so good. Never missed any episodes of it. Hooked on it. Enjoy it and love it. Unfortunately got paramount plus few episodes aired hopefully more than that.

Get back the spirit of the cohesiveness of the team you had in the earliest parts of the show. These guys are brothers, who have each other’s back’s through thick & thin, in the middle of nowhere when it’s life & death and when someone’s having trouble back on the home front. Enough with the constant bickering & one up’s-man-shipping within the team, it’s just not right for this show. Let their personal lives take a bigger back seat role. We know the characters now, we know their families, wives, lovers, children and pets, they don’t need to be in… Read more »

Got moved to Sunday late night besides be on paramount plus which is ridiculous. Look forward new season in the fall so glad reconciliation on regular tv too. It’s going to be good no matter what happen.

Look forward new season coming back paramount plus. Love it and enjoy it this show. So good never missed any of it.

Keep the show on cbs it a great show putitback at a decent time slot not 100pm lot people has jobs thst they need get up early on thursday am go to work cant stay up till 1100pm to watch there favorite show same 4 ncis ,ncis los angelus

Great show. Getting tired of all the family drama, etc. Just keep it a good action show. The new Lt. is not a good fit and does not add anything except distraction. Renew for another season and get it back to the original story lines.

Love Love. Seal Team please renew and have more shows per season. With all the covid stuff they have done a great job love all the cast. I look forward for Wednesday and if thank goodness for dvr

It is a fantastic show . Please do not cancel.

The show has lost a lot of its action and is basically become a nighttime soap opera with the military. Instead of action and following The missions of a seal team it’s becoming boring and that happens once the writers think it needs to be more peaceful and correct.