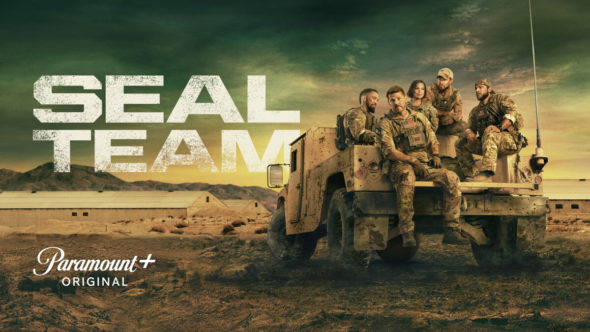 This crew keeps fighting the good fight. Has the SEAL Team TV show been cancelled or renewed for a seventh season on Paramount+? The television vulture is watching all the latest cancellation and renewal news, so this page is the place to track the status of SEAL Team, season seven. Bookmark it, or subscribe for the latest updates. Remember, the television vulture is watching your shows. Are you?

Streaming on the Paramount+ subscription service, the SEAL Team TV show stars David Boreanaz, Max Thieriot, Neil Brown, Jr., A.J. Buckley, Toni Trucks, and Raffi Barsoumian. The military action-adventure series centers on an exclusive Navy SEAL unit as they train for, plan for, and risk their lives to carry out perilous missions for the sake and honor of their country. Despite the hardship it causes them and their families, this SEAL team is ready, willing, and able to embark upon secret missions at the drop of a hat. Fierce and focused Jason Hayes (Boreanaz) leads the Tier One team. Team members include Jason’s trusted confidant, Ray Perry (Brown Jr.); loyal yet self-destructive Sonny Quinn (Buckley); young Clay Spenser (Thieriot), a multilingual and second-generation SEAL; and Omar Hamza (Barsoumian), a senior chief with fifteen years of experience as a SEAL, he’s the son of Syrian immigrants with a deep understanding of the Middle East. No-nonsense DEVGRU Intelligence Officer Lisa Davis (Trucks) is assigned primarily to Bravo Team. Deployed on clandestine missions worldwide at a moment’s notice and knowing the toll it takes on them and their families, this tight-knit SEAL team displays unwavering patriotism and fearless dedication even in the face of overwhelming odds.

Unless they decide to publicize viewership, it is difficult to predict whether Paramount+ will cancel or renew SEAL Team for season seven. By all accounts, the show remains very popular with subscribers and that’s what’s most important to Paramount+. I think it has a very good chance of being renewed. I’ll keep my ears open and an eye out for news, and will update this page with breaking developments. Subscribe for free alerts on SEAL Team cancellation or renewal news.

What do you think? Do you hope the SEAL Team TV show will be renewed for a seventh season? How would you feel if Paramount+ cancelled this TV series, instead?

Put it back on commercial TV. I have zero respect for the network for moving this mid season after watching it since the beginning. Sad. I refuse to subscribe for that alone.

Please DO NOT cancel! It’s one of the best shows on television. Just as the Unit was! Somehow they take all the good ones off and leave us with reality tv!!

Best show to watch! Hope it comes back with season 7

Please keep Seal Team going. I got Paramount+ just to watch it.