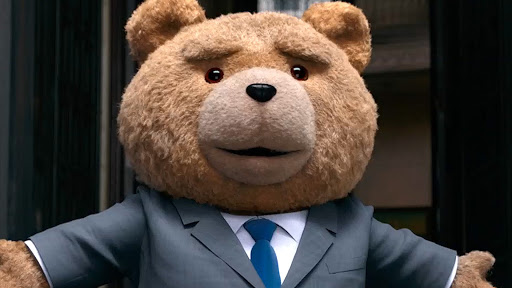 Ted is coming to Peacock. The streaming service has ordered a prequel series for the outspoken character which has been featured in two feature films — Ted and Ted 2. A cast for the comedy series has not been set, but Ted director/producer/writer Seth MacFarlane is in talks to return as the voice of the jumbo teddy bear character.

Peacock revealed more about the prequel series for Ted in a press release.

“Peacock has announced a straight-to-series order for Ted, from UCP, a division of Universal Studio Group, and MRC Television.

· The series is based on the hit Universal Pictures and MRC Film’s Ted, the highest grossing original R-rated comedy of all time (not a sequel or based on other IP). Collectively Ted and Ted 2 grossed more than $750 million worldwide.

· MacFarlane is in negotiations to reprise the voice of the iconic and lovable foul-mouthed teddy bear.

· The live-action series, based on Seth MacFarlane’s feature films released by Universal Pictures with MRC Film, will be executive produced by MacFarlane and Erica Huggins for Fuzzy Door.

· This is the second series order since MacFarlane and Fuzzy Door signed an overall development deal with UCP in 2020. Earlier this year, Peacock announced a series order of “The End is Nye” hosted by Bill Nye. The series is produced by Universal Television Alternative Studio and UCP, divisions of Universal Studio Group, and Fuzzy Door.”

A premiere date for the Ted series has not been set.

What do you think? Are you planning to check out Ted on Peacock? Did you enjoy the movies?