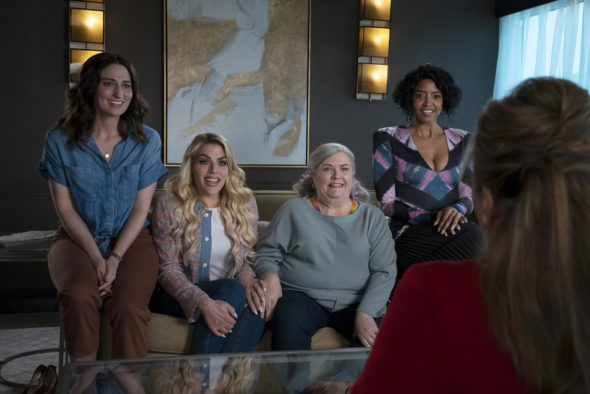 The band is staying back together. Peacock has renewed the Girls5eva TV show for a second season. A premiere date will be announced at a later time.

A musical comedy series, the Girls5eva TV show was created by Meredith Scardino and stars Sara Bareilles, Renée Elise Goldsberry, Paula Pell, and Busy Philipps. When a one-hit-wonder girl group from the 1990s gets sampled by a young rapper, its members reunite to give their pop star dreams one more shot. The band members are chill Dawn (Bareilles), sexy Summer (Philipps), workaholic Gloria (Pell), and fierce Wickie (Goldberry). This may be tougher than expected since the loss of Ashley (Ashely Park), the fifth member of the band who also kept them together. The band also finds that they must navigate the intricacies of a new, more socially conscious society — realizing that their old music wasn’t all that uplifting to young women. Toggling between 1999 and 2021, the story sheds light on their fall from stardom and return to relevance as the women balance spouses, kids, jobs, debt, aging parents, and shoulder pain.

The first season of eight episodes was released on May 6th.

· “We are so excited to continue ‘Girls5eva’ alongside this incredibly talented group of cast and producers,” said Lisa Katz, President, Scripted Content, NBCUniversal Television and Streaming. “It was hard to miss the immediate fandom that was born after the launch of this series. This aspirational comeback story is filled with heart and friendship, perfectly blended with catchy-songs and humor, and delivered by an exceptionally versatile cast. We look forward to following this group’s journey as they continue to hit just the right notes.”

Season one of the series reached “Certified Fresh” status on Rotten Tomatoes, with the Top Critic rating remaining at 100%. All eight episodes of season one are streaming now on Peacock.

As a companion to the first season, Peacock and Epic Records released a soundtrack album, Girls5eva: Music From The Peacock Original Series. The nine-track collection is available HERE.

When a one-hit-wonder girl group from the 90’s gets sampled by a young rapper, its members reunite to give their pop star dreams one more shot. They may be grown women balancing spouses, kids, jobs, debt, aging parents, and shoulder pain, but can’t they also be Girls5eva?

What do you think? Have you enjoyed the Girls5eva TV series? Are you glad that this peacock series has been renewed for a second season?

Aw, I love this show! Smart and funny and not OTT woke. I’m glad it’s coming back.

Stupidest,most brain numbing and ridiculous show I have ever lost moments of my life on that I will never get back.Ugh,so many good shows cancelled and this is what they bring us? 🙁