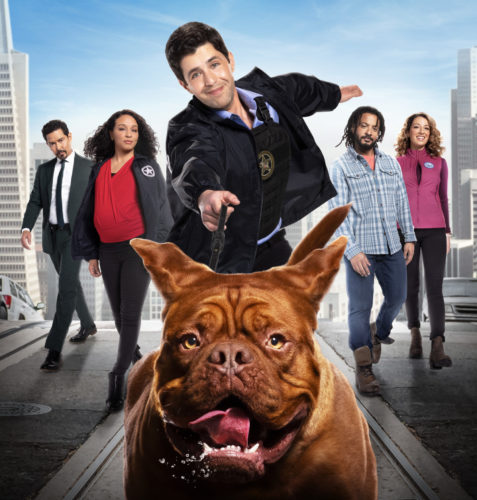 TV show description:
A comedy series, the Turner & Hooch TV series was created by Matt Nix and is a continuation of the 1989 movie of the same name.

In the show, ambitious and buttoned-up US Marshal Scott Turner (Peck) inherits a big, unruly, and slobbery French Mastiff named Hooch, much like his father (Tom Hanks in the movie) did. He soon realizes that the dog he didn’t want may actually be the partner that he needs.

At work, Scott’s brave and street-smart partner is Jessica Baxter (Patterson). Xavier Wilson (McLaren) is a cool and enigmatic marine-turned-US Marshal. Chief James Mendez (Ruivivar) is Scott’s boss who secretly has a soft spot for Hooch. Erica Mounir (Lengies) is the quirky head of the US Marshals’ dog training program.

Series Finale:
Episode #12 — Bite Club
On the heels of getting captured in episode 11, Scott is desperate to escape and reunite with Hooch. With no way out, he realizes his only hope is to team up with Nuke, an angry pit bull who badly needs a friend. Laura rounds up every person and every dog she can find to rescue her brother, stop Walton, and pull off a daring rescue before it’s too late.
First aired: October 6, 2021.

What do you think? Do you like the Turner & Hooch TV show? Do you think it should have been cancelled or renewed for a second season?

it was one of the top shows me and my family and friends watched all 12 in a row and couldn’t get enough what a awesome family show finally no cussing no blood and guts just laughed and cried it would be such a shame to cancel it.

Please consider renewing series. One of the only good family shows on TV right now.

Please reconsider in renewed another season look forward to seeing it all. Enjoy it and love it. Never missed any episode of it.

This sh0w is s0 great it’s literally my 3rd time watching it fr0m the start❣️Best sh0w I’ve seen J0sh Peck in since I was a little girl❣️ S0 many unanswered questi0ns with 0nly 1 way 2 d0 s0. I’m dying 2 have them answered s0 are MANY 0ther l0yal fans❣️ Seas0n 2 PLEASE and thank u

We can’t wait for Wednesday so we can watch it!!!! Our favorite show.

Please let there be Series 2, I love the show