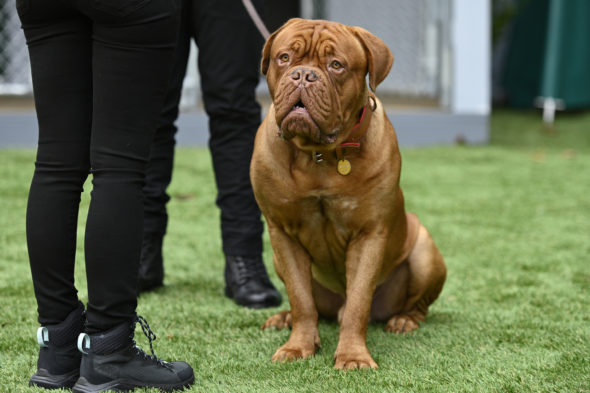 Who’s training who in the first season of the Turner & Hooch TV show on Disney+? As we all know, the Nielsen ratings typically play a big role in determining whether a TV show like Turner & Hooch is cancelled or renewed for season two. Disney+ and other streaming platforms, however, collect their own data. If you’ve been watching this TV series, we’d love to know how you feel about the first season episodes of Turner & Hooch here. *Status update below.

A Disney+ comedy series, the Turner & Hooch TV series is a continuation of the 1989 movie of the same name. It stars Josh Peck, Carra Patterson, Lyndsy Fonseca, Vanessa Lengies, Brandon Jay McLaren, Jeremy Maguire, Anthony Ruivivar, Reginald VelJohnson, and Becca Tobin. In the show, ambitious and buttoned-up US Marshal Scott Turner (Peck) inherits a big, unruly, and slobbery French Mastiff named Hooch, much like his father (Tom Hanks in the movie) did. He soon realizes that the dog he didn’t want may actually be the partner that he needs. Scott’s family includes his sweet and animal-loving sister, Laura (Fonseca), and Matthew Garland (Maguire), Laura’s dog-loving son. At work, Scott’s brave and street-smart partner is Jessica Baxter (Patterson). Xavier Wilson (McLaren) is a cool and enigmatic marine-turned-US Marshal. Chief James Mendez (Ruivivar) is Scott’s boss who secretly has a soft spot for Hooch. Erica Mounir (Lengies) is the quirky head of the US Marshals’ dog training program.

What do you think? Which season one episodes of the Turner & Hooch TV series do you rate as wonderful, terrible, or somewhere between? Do you think that Turner & Hooch on Disney+ should be cancelled or renewed for a second season? Don’t forget to vote, and share your thoughts, below.

Loved Turner and Hooch , would have loved season 2

Love this show!! I looked forward to watching each week for a new episode. Now waiting for the next season!!! NO, please renew for Season 2 and 3 and 4, etc.

This was an awesome an wholesome show. Loved every minute of it. I even binged watched it!! Please renew for Season 2 and even more! The people want good shows again!

I absolutely love this show! First love Josh peck!!!!! Such a great actor. I started off thinking it was a remake of movie after episode one I was hooked. Been such a long time since we can sit down as a family to watch a good show. Please give this show a second season give it a chance to

Please renew, have to see Scott and Erica get together !!!

Can’t say enough about how much we love Turner & Hooch. We can’t wait each week for the next show. Every character is perfect. Such a great feel good show!!
Please renew this show for another season!!