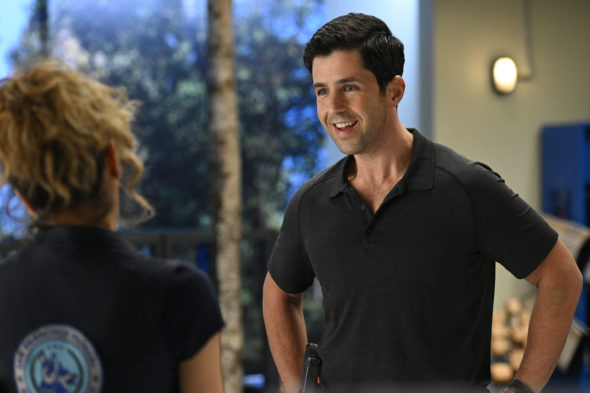 How long will this show last (in dog years)? Has the Turner & Hooch TV show been cancelled or renewed for a second season on Disney+? The television vulture is watching all the latest cancellation and renewal news, so this page is the place to track the status of Turner & Hooch, season two. Bookmark it, or subscribe for the latest updates. Remember, the television vulture is watching your shows. Are you?

Streaming on the Disney+ subscription service, the Turner & Hooch TV series is a continuation of the 1989 movie of the same name. It stars Josh Peck, Carra Patterson, Lyndsy Fonseca, Vanessa Lengies, Brandon Jay McLaren, Jeremy Maguire, Anthony Ruivivar, Reginald VelJohnson, and Becca Tobin. In the show, ambitious and buttoned-up US Marshal Scott Turner (Peck) inherits a big, unruly, and slobbery French Mastiff named Hooch, much like his father (Tom Hanks in the movie) did. He soon realizes that the dog he didn’t want may actually be the partner that he needs. Scott’s family includes his sweet and animal-loving sister, Laura (Fonseca), and Matthew Garland (Maguire), Laura’s dog-loving son. At work, Scott’s brave and street-smart partner is Jessica Baxter (Patterson). Xavier Wilson (McLaren) is a cool and enigmatic marine-turned-US Marshal. Chief James Mendez (Ruivivar) is Scott’s boss who secretly has a soft spot for Hooch. Erica Mounir (Lengies) is the quirky head of the US Marshals’ dog training program.

Unless they decide to publicize viewership, it is difficult to predict whether Disney+ will cancel or renew Turner & Hooch for season two. Since Disney+ isn’t ad-supported, it can take a chance on series it believes in. This show is tied to a well-known movie and fits well with the Disney brand so I think it will be renewed. I’ll keep my ears open and an eye out for news, and will update this page with breaking developments. Subscribe for free alerts on Turner & Hooch cancellation or renewal news.

What do you think? Were you hoping that the Turner & Hooch TV show would be renewed for a second season? Are you sorry that Disney+ renewed this TV series, instead?

Bring back Turner and Hooch!

More please! Super entertaining series that just gets better the more episodes you watch. So disappointed there want be a second season 🙁 If there’s a petition to another season let me know!

Bring turner and hooch back for season 2 it’s enjoyable watching I love the concept from the movie with Tom Hanks just bring it back!!

I loved this show. So entertaining and I loved all the characters and dogs. Please bring it back