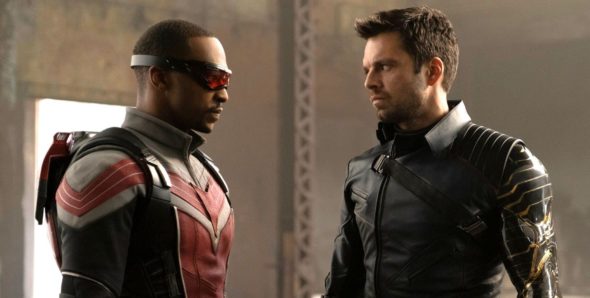 TV show description:
An action-adventure series, The Falcon and The Winter Soldier is set in the Marvel Cinematic Universe.

The Falcon, aka Sam Wilson (Mackie), is a veteran US Air Force Pararescueman who flies using a jet pack with articulated wings.

The Winter Soldier, aka Bucky Barnes (Stan), was Steve Rogers’ longtime friend and fighting partner in World War II. He was lost and believed to be dead but returned 70 years later as a brainwashed assassin.

Both Falcon and Winter Soldier help to defeat the alien Thanos and, at the end of the Avengers: Endgame feature film, an elderly Rogers passes the mantle of Captain America to Wilson.

Now, six months later, Wilson and Barnes team up for a global adventure that tests their abilities and their patience.

Other characters include John Walker (Russell), a high-ranking member of the military and the government’s choice to become the new Captain America; Sharon Carter (VanCamp), a former agent of SHIELD and Agent Peggy Carter’s niece who’s been on the run; and Helmut Zemo (Bruhl), a Sokovian terrorist whose actions were responsible for the Avengers’ breakup in the Captain America: Civil War film.

What do you think? Do you like The Falcon and the Winter Soldier TV show? Do you think it should be renewed for a second season?