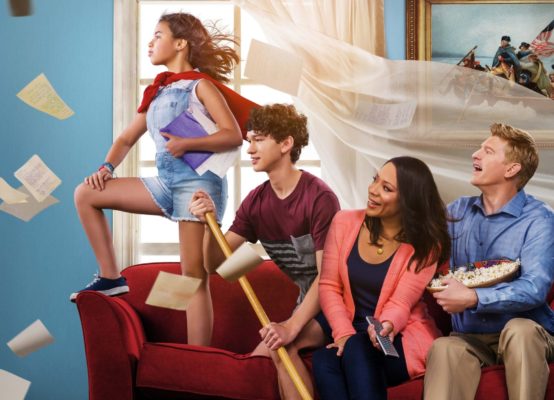 TV show description:
A family comedy series, the Diary of a Future President TV show unfolds the origin story of a future leader. Executive producers are Gina Rodriguez (who plays the lead character as an adult), showrunner Robin Shorr, Emily Gipson, and series creator Ilana Peña. The show is based on Peña’s childhood.

Told via the narration of the diary of Elena Cañero-Reed (Romero), a 12-year-old Cuban American girl, the series follows her journey through the ups and downs of middle school. This sets her on the path to becoming the president of the United States.

Elena is an ultra-observant student with a strong point of view. She walks through the world with purpose and confidence. Bobby (Bushnell) is Elena’s sweet and mischievous older brother.

Gabi Cañero-Reed (Leyva) is a sharp lawyer and the kids’ loving mom. Sam Faber (Weaver) is a lawyer at Gabi’s firm and the two develop a relationship. Camila (Garcia) is a paralegal and Gabi’s close friend.

What do you think? Do you like the Diary of a Future President TV show? Do you think it should have been cancelled or renewed for a third season?

PLEASE COME OUT WITH A SEASON THREE FOR DIARY OF A FUTURE PRESIDENT! I HAVE NO IDEA WHY EVERYONE ELSE IS NOT AS OBSESSED WITH IT AS I AM BUT DISNEY IS CRUEL IF THEY LEAVE US HANGING WITH JUST AS SEASON TWO