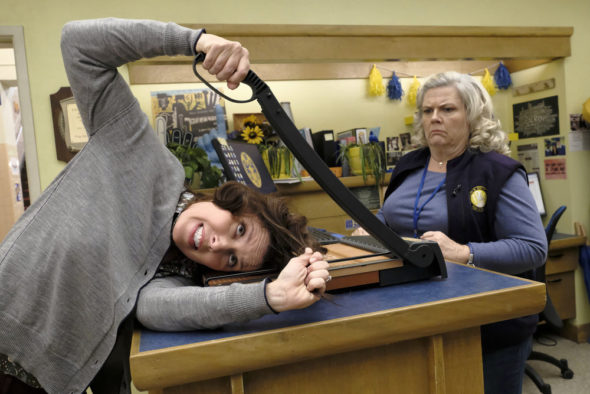 Does Jack’s future lie at Whitlock High? Is the AP Bio TV show been cancelled or renewed for a third season on NBC? The television vulture is watching all the latest cancellation and renewal news, so this page is the place to track the status of AP Bio, season three. Bookmark it, or subscribe for the latest updates. Remember, the television vulture is watching your shows. Are you?

The second season of AP Bio is averaging a 0.46 rating in the 18-49 demographic and 1.88 million viewers. Compared to season one, that’s down by 32% and 26%, respectively. Find out how AP Bio stacks up against other NBC TV shows.

Will NBC cancel or renew AP Bio for season three? The ratings in the first season were not that good. The second season got off to a very poor start and haven’t gotten much better. Can they improve enough to secure a third season renewal? I highly doubt it. I’ll keep an eye on the numbers and will update this page with breaking developments. Subscribe for free AP Bio cancellation or renewal alerts.

7/17/19 update: AP Bio was later picked up for a third season for the as-yet-untitled NBCUniversal streaming service.

What do you think? Are you glad that the AP Bio TV series has been renewed for a third season? Will you watch it on Peacock?

just discovered AP Bio and I love it!

AP Bio is my favorite show on TV right now. It’s the funniest show on TV since 30 Rock retired.

The more I watch the more I like it. Fun cast!!

I can’t believe this show was green-lit for a FIRST season, let alone get renewed. One of the most mean-spirited shows EVER…

The first season is about self destructive realization, the second it how to grow from mundanity. This is by far one of the least mean-spirited shows of the decade.