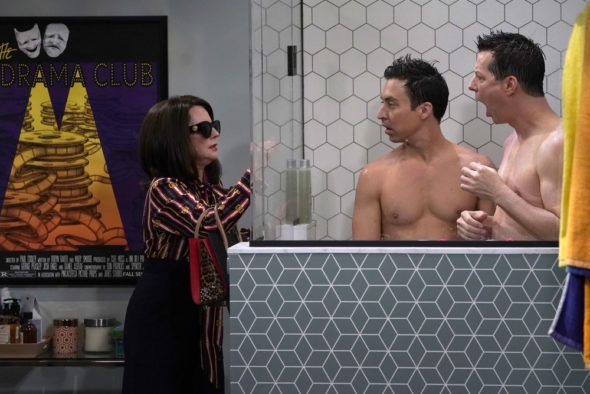 Do Will, Grace, Jack and Karen have staying power? Is the Will & Grace TV show cancelled or renewed for an 11th season on NBC? The television vulture is watching the latest cancellation and renewal news, so this page is the place to track the status of Will & Grace, season 11. Bookmark it, or subscribe for the latest updates. Remember, the television vulture is watching your shows. Are you?

The tenth season of Will & Grace averaged a 0.74 rating in the 18-49 demographic and 3.02 million viewers. Compared to season nine, that’s down by 50% and 45%, respectively. Compare its standing to the other NBC TV shows we are tracking.

You can sit back and enjoy the sass without worrying whether NBC will cancel or renew Will & Grace for season 11. They already picked it up, during season nine (i.e. the first season of the revival). Still, since even renewals can be cancelled, subscribe for free Will & Grace cancellation and renewal news alerts.

What do you think? Should NBC have renewed the Will & Grace TV series through season 11, so far in advance? Will the TV show revival remain a hit with viewers or, could viewers lose interest until it is cancelled?

I think this show is WAY too racy for regular TV, maybe Netflix would be better? It is too sexual, and WAY too political to be a regular tv show. I did enjoy the original WNG, but the new one? Yeah, NO!!! Every episode takes a shot at a political side, usually against our President, whether I agree or disagree with, is still our President. And the comments such as “she’ll be coming round the mountain when she comes” is NOT meant for even a 11 pm time frame. Liked the old, HATE the new