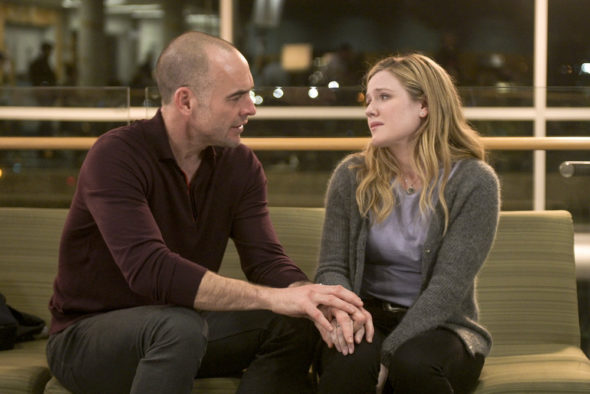 The summer is over and so is The InBetween TV show on NBC. The drama series, which ran from May until August, has been cancelled and won’t be returning for season two next year.

A psychic police procedural, The InBetween stars Harriet Dyer, Paul Blackthorne, Justin Cornwell, Anne-Marie Johnson, Cindy Luna, Chad James Buchanan, Andres Joseph, Michael B. Silver, and Sean Bulger. The paranormal drama centers on Cassie Bedford (Dyer), who is gifted with abilities she often considers a curse. Cassie has unbidden visions of events past and future and is also approached by spirits who need her help in some way. She gets drawn into the cases her foster father, Seattle Police detective Tom Hackett (Blackthorne), works with his new partner, former FBI profiler and LAPD detective Damien Asante (Cornwell).

The first season of The InBetween averaged a 0.40 rating in the 18-49 demographic and 2.57 million viewers. Of the peacock network’s seven summer series, The InBetween ranked in last place in the demo and nearly last place in viewers (just about Hollywood Game Night).

The show’s 10th and final episode aired on August 14th and left fans with a cliffhanger that seems unlikely to be resolved.

Thanks for everyone who watched #theinbetween no second season but you can stream our 10 episodes on Hulu or the NBC app! Love you guys!

What do you think? Did you like The InBetween TV show on NBC? Would you have watched a second season in 2020?

Why cancelled… all the good shows get cancelled…. please bring it back for season 2

What the Hell? I loved that show. Can’t believe it! so did my cousin was looking forward to a second season!!

So disappointed! Was really looking forward to season 2. I love this show!

This was an excellent series. Great premise, excellent writing and superb acting. Harriet Dyer who played Cassie was beautiful and had a great presence that made you want to see the next episode. Paul Blackthorme and Michael B. Siver did a fantastic job playing Cassie’s gay fathers. They were very believable as a couple and their relationship with Caasie. Overall just an excellent cast. Thanks once again to the 18-49 demographic whose failure to reconize a great show got it cancelled.

THIS WAS GREAT SERIES. A good beginning to the characters. Nothing to complain about.
WHY IS IT THAT NO ONE GIVES ANYTHING A CHANCE TO BUILD UP ANYMORE and for people to find out about something before it is cancelled.
With the same thinking, Elton John would of been cancelled before been given the chance he actually was. He was always great.
lost what could of been a long running show.
The decision making – sadly, I feel – is flawed.
A similar bad decision was the cancellation of the sitcom “Everybody Hates Chris”.

This was a great series…what a shame it was canceled!!!

There wasn’t anything wrong with THE INBETWEEN !! someone NEEDS TO GIVE IT A CHANCE! NO WONDER CBS KICKED YOUR BUTTS! YOU NEED PEOPLE IN HE REAL WORLD RATING SHOWS! LEAVE IT ON OR HOPEFULLY ANOTHER NETWORK WILL PICK IT UP!