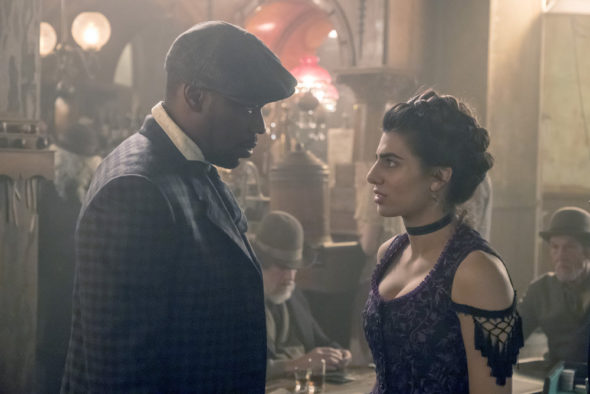 Rittenhouse has won this round, so who’s going to save Rufus? NBC has cancelled its Timeless TV show after two seasons and a hard-fought campaign by fans and the writers alike. The second season ended on a heart-stopping cliffhanger, which is frustrating for fans, but reportedly, there are talks of a two-hour movie to wrap things up. Will it happen? Stay tuned.

An NBC time-travel drama from Eric Kripke and Shawn Ryan, Timeless stars Matt Lanter, Abigail Spencer, Goran Višnjić, Malcolm Barrett, Paterson Joseph, Sakina Jaffrey, and Claudia Doumit. As the Time Team, their mission is to prevent the destruction of our world as we know it. Susanna Thompson, Annie Wersching, and Michael Rady recur in season two as members of the nemesis organization, Rittenhouse. 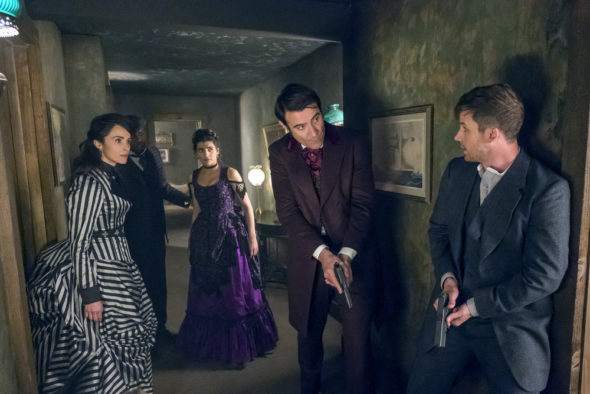 The second season of Timeless averaged a 0.61 rating in the 18-49 demographic and 2.52 million viewers. Compared to season one, that’s down by 44% and 45%, respectively. Find out how Timeless stacks up against other NBC TV shows.

Time’s up for Timeless: NBC has officially passed on making a third season of the show, EW has learned.

The cult-favorite time-travel drama has been axed by the network after a lengthy decision-making process in which the network and studio Sony Pictures Television tried to find a financially agreeable path to renew the show for weeks.

Thursday’s news will surely be disappointing for fans because the season 2 finale ended on a major cliffhanger. All may not be lost, however: Sources say there are discussions about wrapping things up in a two-hour movie, but those talks have been going on for awhile and it’s unclear if anything will come of them.

What do you think? Will you watch a movie to wrap up the storyline? Should NBC have cancelled or renewed Timeless for season three? Sound off in the comments.

I’m not to happy with the cancellation of this show . It only has 2 season and it was getting really good . Y’all have to bring it back .

You are right Samantha…too soon for stop it..It was a great series!!I hope something good happen like Christmas miracle!!!Who knows!!!

Sad it was canceled. I’m watching less television since every show I like ends up history.

I have really enjoyed the history tid bits in this show. Please don’t cancel! At any rate, a wrap-up show is a must.

THEY”RE KILLING ME TIME TO GO DIRECTLY TO ENDED Episodes ONLY!

Please, Please, Please bring it back!!! Back if you simply must cancel the show, then yes please do a movie to give us loyal fans an ending, don’t just leaving us hanging!

PLEASE, PLEASE, PLEASE bring it back!!! But if you just must cancel it, yes please, do a 2 hour movie and at least give us loyal fans and ending..

This show was so good…not only did it teach us history …it kept us on our toes to see what Rittenhouse would throw at us this week….it deserves to live on , even if it is only a 2 hour movie to clear things up…..like The Pretender!