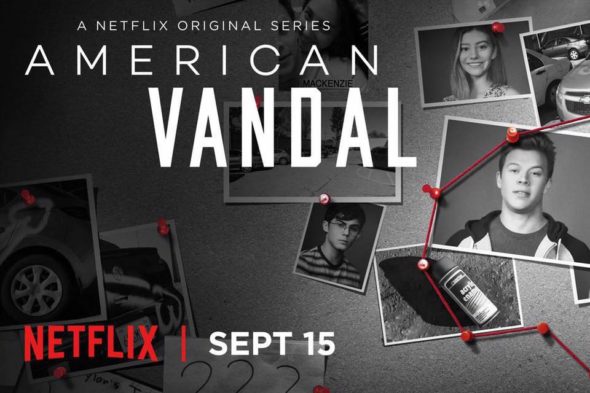 Despite his desire for a normal life, which he claims includes pursuing an engineering degree after graduation, Dylan Maxwell (Tatro) is the obvious suspect. His proclivity for drawing genitalia and simulating sex acts — on anything that stands still for long enough — are well documented. In fact, Dylan’s motto may well be, “Another day, another dick.” For the most part, the Hanover High community stands ready to convict Dylan — and not without reason.

Enter fledgling sophomore documentarian, Peter Maldanaldo (Alverez). While at first glance, the evidence against Dylan appears overwhelming, some key details of the crime differ from his usual M.O. First, there is the clear-cut difference in how pubic hairs are depicted in Dylan’s — shall we say — portfolio, versus their absence at the crime scene. More importantly, perhaps, is the fact that the parking lot security footage has been deleted. While Dylan is certain up to committing the crime, it seems unlikely he’s capable of the cover-up.

Even as Dylan proclaims his innocence to his mom, Peter, and anyone else who will listen, the question remains: who drew the dicks?

Series Finale:
Episode #16 — “The Dump”
Who is the Turd Burglar, and why did they do it? Are Peter and Sam still chasing the truth, or has it been right under their noses the whole time? (Courtesy of Netflix)
First aired: September 14, 2018

What do you think? Do you like the American Vandal TV series? Should this TV show be cancelled or renewed for another season on Netflix?

Renew it and make more!