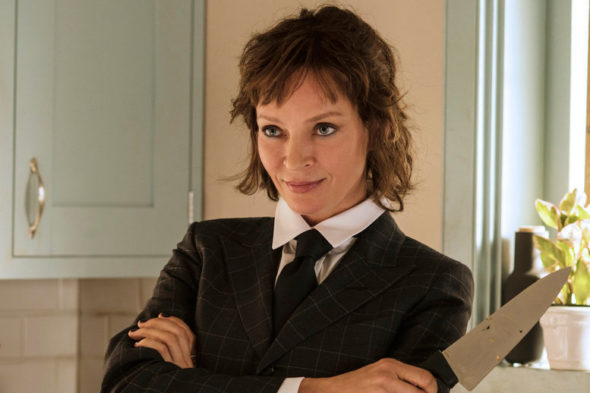 “I don’t want this life.” This week, Bravo announced season two of Imposters will premiere in April.

The dark comedy follows a beautiful con-artist named Maddie (Inbar Lavi), who changes identities and leaves her unwitting victims tormented when they realize they have been used and robbed of everything — including their hearts. The cast also includes Rob Heaps, Parker Young, Marianne Rendón, Stephen Bishop, Brian Benben, and Katherine LaNasa.

For season two of Imposters, guest star Uma Thurman will be reprising her role as fixer Lenny Cohen. The new season premieres on Bravo on April 5th at 10 p.m. ET/PT.

Last season, the Bumblers joined forces in hopes of tracking Maddie down, becoming embroiled in a thrilling game of cat and mouse, before eventually teaming up with Maddie to pull off the ultimate con. The adventure continues in season two, with Maddie determined to reclaim her life after she and the Bumblers escape her former cohort Max (Benben) and FBI Agent Patrick (Bishop). But in her attempts to settle into a new normal, Maddie quickly realizes that living in the game was not nearly as difficult as leaving it. Just as Ezra, Richard and Jules have begun to master the art of the con, unforeseen events send them off on a wild, unexpected adventure. Meanwhile, Max – along with “The Doctor” (Ray Proscia) – and Patrick are out to seek revenge. With the stakes higher than ever, Maddie and the Bumblers must stay one step ahead in order to maintain their freedom.

In the season two premiere, Maddie decides to lay low at a lake house in Michigan as she tries to escape her former existence. However, she finds her past much harder to shake than anticipated, leaving her in a state of paranoia. The Bumblers head to Richard’s hometown hoping to sell the rare, very expensive ring Ezra stole from Patrick. Their hope for a clean getaway backfires when the tables turn and they find themselves on the run… again.

To catch up on “Imposters” season one, tune in to Bravo on Monday, February 19 from 8am-6pm ET for an all-day marathon. Additionally, season one is currently available on iTunes, Amazon, Google Play, XBOX, Playstation, FandangoNow and Vudu, and is available starting today on Netflix.

For more information on the show, please visit the official Facebook page and join the conversation on Twitter @bravotv using the hashtag #Imposters.

What do you think? Have you seen Imposters? Will you watch season two?

Great show! Love it! Very original, dark and funny at times. I like the characters and who doesn’t just love Uma Thurman? Great add to the cast! Can’t wait!!!!

I wish to God these morons who choose to do or don’t TV would get a new hobby. Are u morons at selling ads or complete idiots? Amazing showy numb nut schmucks. And you’ve waited too long. Bring the show b back. Why nut cut your ties with the worst crap u put out there? Every scream b’s fest of ugly rich skinny fat woman, ewe! Enough. Your Director of PR, grew up just like the franchise, Jen, u should be sick of it at 50. Bring the shows on that make sense u morons. Girlfriends guide, awesome, like it… Read more »