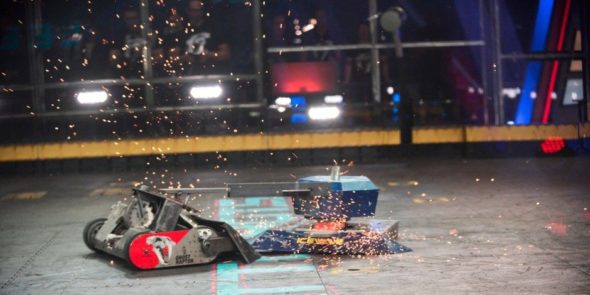 BattleBots is back in action. Recently, Discovery Channel announced they are reviving the TV show for a third season.

The competition series “features the biggest, baddest, strongest, and fastest next-generation robots from all over the world as they duke it out for supremacy in the rapidly exploding world of Robot Combat Sports.” The show was cancelled by ABC last year after two seasons.

The new season of BattleBots is slated to debut this spring on Discovery Channel and Science Channel.

New York) – The epic robot-fighting series BattleBots is making its triumphant return with all-new episodes set to premiere this spring on Discovery Channel and Science Channel. BattleBots features the biggest, baddest, strongest, and fastest next-generation robots from all over the world as they duke it out for supremacy in the rapidly exploding world of Robot Combat Sports.

The metal munching mayhem is back, from the bots to the builders, the flames, the spark and all the robot guts and glory. Each match consists of two robots competing in a single, three-minute bout in which the goal is to destroy or disable their opponent. If there is no knockout during the battle, a panel of judges will declare a victor.

“BattleBots is the perfect union between cutting-edge science and entertainment,” said Marc Etkind, General Manager Science Channel. “Having heard the call from robot fans clamoring for more action, we are thrilled to bring back this iconic series.”

“In BattleBots, anyone can be the champ, and all are welcome to apply,” said Ed Roski, BattleBots Co-founder. “This is a sport for smart people where it’s all about ideas and building something cool. BattleBots is a fight to the death, but no one gets hurt. It’s the place to show-off your imagination, your engineering prowess and art, and your ability to make it survive – and we couldn’t be happier bringing BattleBots to Discovery.” He added: “In my opinion, Discovery is the TV network where BattleBots has always belonged.”

BattleBots highlights the design and build of each robot, bot builder backstories, and their pursuit of the BattleBots championship. Homemade robots built on a myriad of platforms and featuring a huge variety of deadly weapons go head-to-head, all captured by state-of-the-art onboard technology and cameras to enhance viewing and provide combat analytics.

What do you think? Are you a fan of BattleBots? Will you watch the new season?

happy as i wonder why it took science and discovery too take so long as they probably saw the ratings were decent enough that why not do a season 3, plus one of the competiors is in a rocket mortage commercial

When I saw the re-runs this past summer I didn’t know at first if these were new or not. I quickly realized that they weren’t. I was fully expecting to see another season shortly thereafter but was disappointed to see nothing about it. I’m glad to hear it’s coming back!

Heck yes I’ll be watching. Was afraid we had seen the last of the ‘bots. This is great news. Can’t wait to watch!