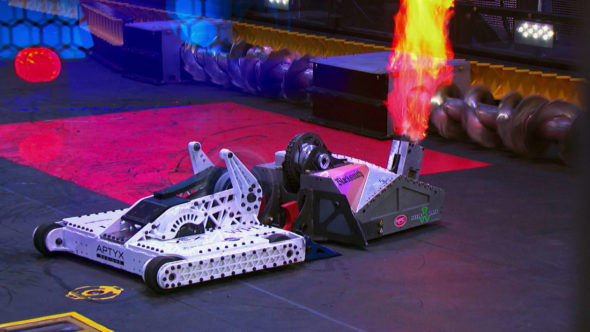 BattleBots is back in action! Discovery Channel just announced the TV show’s fourth season will premiere in June.

The competition series reboot, which aired its first two seasons on ABC, “features the world’s biggest, baddest, strongest, and fastest next-generation robots from all over the world as they duke it out for robot fighting supremacy.”

(NEW YORK) – The epic robot-fighting series BattleBots is set for its second season on Discovery Channel and Science Channel. BattleBots features the world’s biggest, baddest, strongest, and fastest next-generation robots from all over the world as they duke it out for robot fighting supremacy. 2018 Champion Bite Force will return to defend its title against top competition including perennial contenders Tombstone, Minotaur, Witch Doctor, Bronco, Bombshell, and Yeti. Eight two-hour episodes will begin airing Friday, June 7 at 8 p.m. ET/PT on Discovery, while Science will air on Wednesday nights from 8-10pm starting June 12.

The metal munching mayhem is coming back, from the bots to the builders, the flames, the spark and all the robot guts and glory. Each match consists of two robots competing in a single, three-minute bout, the goal is to destroy or disable their opponent. If there is no knockout during the battle, a panel of judges will declare a victor. The play-by-play team of Chris Rose and Kenny Florian will return to call all the action. Faruq Tauheed is back as the ring announcer. Jenny Taft joins the fun this season as the sideline reporter.

BattleBots also highlights the design and build of each robot, bot builder backstories, and their pursuit of the BattleBots championship. Homemade robots built on a number of platforms and featuring a huge variety of deadly weapons go head-to-head, all captured by state-of-the-art onboard technology and cameras to enhance viewing and provide combat analytics.

What do you think? Do you watch BattleBots? Will you watch the new season?