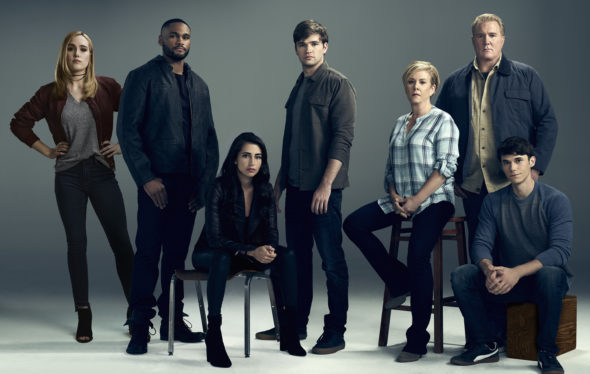 Will Holden Matthews ever again live a normal life? Is the Beyond TV show cancelled or renewed for a third season on Freeform? The television vulture is watching all the latest cancellation and renewal news, so this page is the place to track the status of Beyond, season three. Bookmark it, or subscribe for the latest updates. Remember, the television vulture is watching your shows. Are you?

Airing on the Freeform cable channel, Beyond stars Burkely Duffield, Romy Rosemont, Michael McGrady, Jonathan Whitesell, Dilan Gwyn, Jeff Pierre, and Eden Brolin. The sci-fi mystery drama follows Holden Matthews (Duffield), who woke after a dozen years in a coma to find himself at the center of a conspiracy in a changed world. Season two kicks off with Holden thinking he has completed his mission within the Realm and that he and Willa (Gwyn) can live out normal lives. Soon though, he’ll have to question if that’s what he really wants and whether or not the Realm still poses a threat to him and his loved ones.

The second season of Beyond averaged a 0.08 rating in the 18-49 demographic with 244,000 viewers. Compared to season one, that’s down by 48% and 56%, respectively. Learn how Beyond stacks up against other Freeform TV shows.

Last year, after just a couple episodes aired, Freeform released the whole first season of Beyond online. Meanwhile, even though it earned low “linear” ratings, they picked it up for a second season. It’s not clear how much traditional ratings measures will matter to this Y.A.-targeted network, when its deciding whether to cancel or renew Beyond for season three. The traditional ratings were pretty terrible in season two so, if that’s the determining factor, this show is doomed. I’ll keep an eye on this series and will update this page with breaking developments. Subscribe for free alerts on any Beyond cancellation or renewal news.

3/30/2018 update: As expected, Freeform has cancelled Beyond after two seasons. Details here. Now, I must fly. I have dinner plans.

What do you think? Were you hoping that the Beyond TV show would be renewed for season three? Are you sorry that Freeform cancelled this TV series, instead?

Just watched Beyond & although it’s not one of my top 5 all time fav shows, I did enjoy it & I’m gutted that it’s been cancelled. I’m so sick of these broadcasters ect cancelling shows on cliff hangers. They don’t give a s**t about the fans/viewers & it’s not right or fair. At least round the show off for the fans/viewers for gods sake. It wouldn’t take much for them to do that surely.

Gutted to have just watched seasons 1 and 2 then learn that season 3 has been cancelled. I was enjoying the show and it ended on such a cliffhanger .

I cannot believe this hasn’t got another series so dissapointed