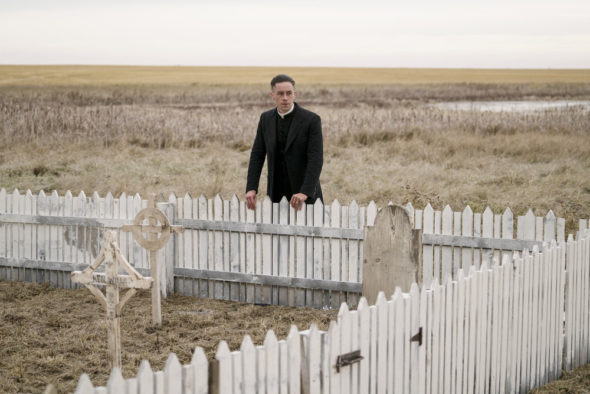 Are Seth Davenport and Creeley Turner damned if they do and damned if they don’t? Has the Damnation TV show been cancelled or renewed for a second season on USA Network? The television vulture is watching all the latest cancellation and renewal news, so this page is the place to track the status of Damnation, season two. Bookmark it, or subscribe for the latest updates. Remember, the television vulture is watching your shows. Are you?

The first season of Damnation averaged a 0.18 rating in the 18-49 demographic and 682,000 viewers. Find out how Damnation stacks up against other USA Network TV shows.

The ratings haven’t been great but, because the cable network tends to be patient with its original TV series, I expect USA will renew Damnation for a second season but they could easily cancel it. Subscribe for free updates on any Damnation cancellation or renewal news.

1/26 update: Despite the creator’s optimism, Damnation has been cancelled by USA. Details here.

What do you think? Did you watch the first season? Should USA have cancelled or renewed Damnation for season two? Sound off, below.

Absolutely love this show. SAD that it won’t be renewed for a second season. REALLY SAD. They have boring and unppealing shows with 8, 10, and 12 seasons…. It is frustrating that this show, with such a great and addictive plot is cancelled because of limited viewership. If they had marketed it better…..

I LOVE THIS SHOW. Bring this back!

By far one of the best series I’ve watched in a long time. Extremely disappointed it was canceled. Hopefully it does end up being renewed. There’s so many paths in which the story line can go and so many great opportunities

Great series, bring it back.

Just finished watching Damnation on Netflix. I never heard of this show until a coworker told me about it. I’m typically not a fan of cowboy shows but this one had me hooked from the first episode! I’m so upset that the second season is cancelled because they ended the last episode of the first season with so much potential for the next season!!! I hope they renew it and the new season will have the hype it deserves

This was an amazing show I watched on Netflix! I’m not happy there is not going to be a second season because this was a great show. Disappointed that Netflix hasn’t made a season 2,YET!!! BRING IT BACK TO LIFE!!!!

Loved this show. Watched season 1 twice. Just found out that their aren’t going to be any more seasons. I am so disappointed

Can’t believe you cancelled the 2nd season!!! Loved this show!! Bring it back!!!

SEASON 2 IS NEEDED TO COMPLETE SEASON 1. THEN YOU MAY END.

Unfortunately, the entertainment that’s popularized today isn’t of traditional U.S. values. This show contains those values. The perfect script, the perfect soundtrack, and the perfect characters make this work so memorable. God’s body is truly strengthened through love, fear, and honor. If anything, a season 2 is needed to complete season 1, and it probably should stop at season 2 to keep this piece a short and sweet memory of good art in times of god-forsaken art.

This was an excellent show! Such a refreshing break from the same old tired and overused story lines of the usual shows. USA should pull their heads out of their holes – anyone who knows anything about what makes a good tv show would keep this show going. So disappointed!!
Writers should sign with a different network for season two!

Please renew for a second season! First season was fantastic. How could anyone miss the greatness this show was. Better than Godless!

Jennifer One of the best unique shows on TV every episode leaving you wanting more. Wonderful cast please do another season. How can you not see its a GREAT SERIES