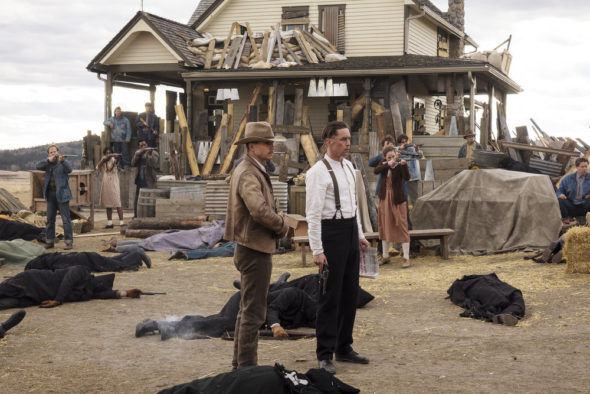 While Dante would say, “Abandon hope, all ye who enter here,” we’re not, but that’s just because nobody talks like that, anymore. USA Network has cancelled its Damnation TV show after just one season of 10 episodes. That means the season one finale, episode 1.10, “God’s Body,” which aired on January 18th, will now serve as the unintentional Damnation TV series finale.

Damnation: A Look at the Ratings

The first season of Damnation averaged a 0.18 rating in the 18-49 demographic and 682,000 viewers. Out of the 10 USA Network TV shows we’re currently tracking, Damnation ranked seventh in terms of its demo ratings and rose to sixth place in terms of total audience size. While it could have gone either way, the cancellation isn’t shocking.

In addition to Deadline and Variety confirming USA has passed on picking up Damnation season two, creator Tony Tost addressed the cancellation on Twitter. Check it out.


I love what we made, and how we went about making it. I'm proud to have #DamnationTV out there for people to still find days and weeks and months and years from now. Thanks and love to all who helped and supported and watched. https://t.co/fjjUaTM0zu

Earlier this week, Tost was still holding out hope for a Damnation season two renewal.

What do you think? Did you watch the first season? Should USA Network have cancelled or renewed Damnation for a second season? Sound off in the comments.

I loved the show. I was wanting more. Bring back the show. Please, re-new the series !!!!!!

Please Renew this series! It was Awesome

Good Lord, why… absolutely one of the best tv series I’ve ever watched. I’m amazed I haven’t watched or heard of this great series sooner. This could easily be an amazing lengthy series. Show the #truth and let our youth see what times were like back then, this was a marvelous and inspiring piece of art. Well done, as I know and fear it wont ever come back, it will be forever a show that I will talk about.

https://help.netflix.com/en/titlerequest
Everyone needs to go here and tell them to renew Damnation for a second season

There’s only one reason THEY cancelled Damnation, because the plot of the series began to unveil the truth about the power of the Federal Reserve.. whom are actually privately owned Rothschilds bankers, ..and how their power over Americas government allowed them to buy the ..then president Franklyn Roosevelt, giving him more power over the Federal Reserve board and Americas banking regulations. After the Federal Reserve Act of 1935, Roosevelt changed the rules of Banking in 1936, forcing Americas independent Banks to increase the minimum “reserve holding requirements” by 50% and then did so again in 1937, increasing them by another… Read more »

I watched every second of the first season and was sorry when it was over. Counted the days and waited for Season 2. But it’s not coming and I feel cheated! What a waste of my investment of time. Season have been done if for no other reason than to tie everything up.

One of the best shows I have ever watched hands down! I love the brothers the story everything. I was shocked to see no season 2! Please bring it back I’m dyinggggg!

This was one of the best shows I’ve ever watched. I was so disappointed that there was no season 2. I’m just crushed. Cast is amazing and story line is awesome. Please bring back the show, cancelling was a mistake. I’ll be checking for it.

It was amazing anticipating for season 2!!

We’ve just finished watching the 1st season of DAMNATION on NETFLIX, and completely loved each
and every episode. Now, to read that it has been cancelled,
well, is a disappointment. Would the Writer of this awesome saga have any chance to do a second season through NETFLIX, forgoing USA?

my thoughts exactly, I hope Netflix picks it up, what a disappointment with USA.

Please bring it back for season two! Just when we really fall in love with both brothers, it ends. What happened to Amelia? The Duvall’s still need to be dealt with!! Come on!! We haven’t had a show grip us like this since Longmire!