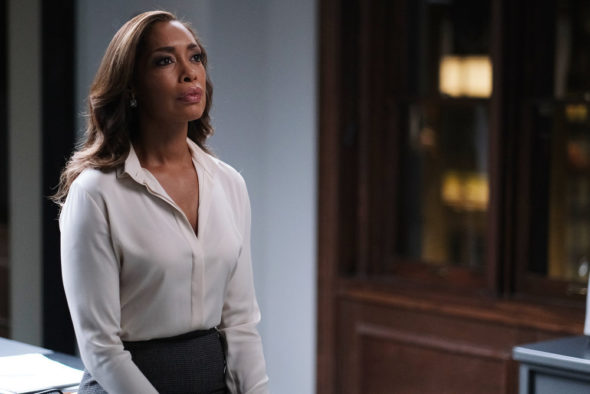 Is Jessica Pearson sticking around Chi-Town? Has the Pearson TV show been cancelled or renewed for a second season on USA Network? The television vulture is watching all the latest cancellation and renewal news, so this page is the place to track the status of Pearson, season two. Bookmark it, or subscribe for the latest updates. Remember, the television vulture is watching your shows. Are you?

The first season of Pearson averaged a 0.10 rating in the 18-49 demographic and 513,000 viewers. Check out how Pearson stacks up against other USA Network TV shows.

Will USA Network cancel or renew Pearson for season two? The premiere drew much lower numbers than its lead-in, the ninth season premiere of Suits and subsequent episodes did even worse. It ended its season as USA’s lowest-rated scripted series so I don’t think there will be a second season. I’ll update this page with breaking developments. Subscribe for free Pearson cancellation or renewal news.

11/1/19 update: USA Network has cancelled the Pearson series so there won’t be a second season.

What do you think?Were you hoping that the Pearson TV show would be renewed for a second season? Are you sorry that USA Network cancelled this TV series, instead?

aaah com’on guys that’s a bad decision…if it’s about viewership the numbers would have gone up the second season evidently that was a given its no brainer….. your loss and ours.
please consider

My wife and I loved Pearson. We were looking forward to a second season. We are so disappointed it was not renewed. It was a perfect transition to a life without “Suits.” Please reconsider!

Loved suits and love Pearson. It’s a Great show!!!! I hope it comes back. If not on USA then another network who is smart enough to pick it up.

A Black woman in a positive leading role finally also in a relationship with a Black man on a major network. Look how long the show lasts. This is bs

I was really disappointed in SUITS cancellation after 9 seasons~was really looking forward to the 10th season. Is there any possibility another network may pick it up?

I was so curious for the 11th episode… hope it’s going to be renewed!!!

Jessica Pearson is a dynamic character that should be on televison. She is doing great things for female characters and the city of Chicago.

This was a great show with a very strong female character. I have seen other very bad shows that are renewed and this excellent one is cancelled. Storyline was great and left viewers wanting more

Best new show. I was waiting for new season. Finale was great. Strong woman. Great storyline. There are crap shows and they get rid of great show

I loved this series. Please bring it back .

I loved the show. Im very disappointed its not being renewed. Such an ending to the first season. I need to see more. Renew the series

We really liked Pearson and hope it returns.

Pearson is a great show that is relevant for today. USA is gradually losing my interest. RENEW PEARSON

It really was a great show. This one should have been renewed. Bring it back.

please just start Suits up again, miss it so much, and renewe Pearson also 🙂