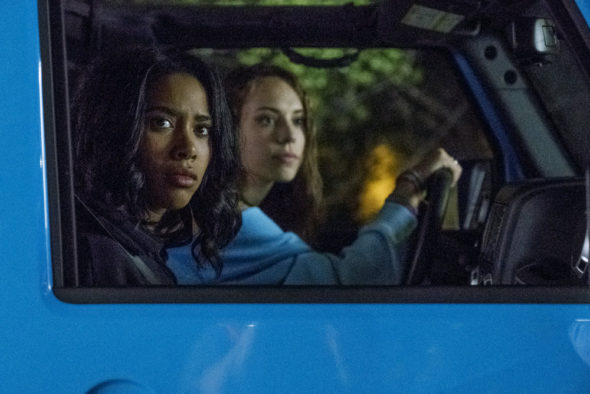 Is this series something to cheer about? Has the Dare Me TV show been cancelled or renewed for a second season on USA Network? The television vulture is watching all the latest cancellation and renewal news, so this page is the place to track the status of Dare Me, season two. Bookmark it, or subscribe for the latest updates. Remember, the television vulture is watching your shows. Are you?

Airing on the USA Network cable channel, Dare Me is based on a novel by Megan Abbott and it stars Willa Fitzgerald, Herizen Guardiola, Marlo Kelly, Paul Fitzgerald, Zach Roerig, Rob Heaps, and Alison Thornton, with Chris Zylka, Taveeta Szymanowicz, Tammy Blanchard, Antonio J. Bell, and Amanda Brugel in recurring roles. The series explores the cutthroat world of competitive high school cheerleading in Sutton Grove, a small Midwestern town. It follows the fraught relationship between best friends Addy Hanlon (Guardiola) and Beth Cassidy (Kelly) after a new coach (Fitzgerald) arrives to bring their team to prominence. While the girls’ friendship is put to the test, their young lives are changed forever when a shocking crime rocks their quiet rust belt town.

The first season of Dare Me averaged a 0.13 rating in the 18-49 demographic and 402,000 viewers. Find out how Dare Me stacks up against other USA Network TV shows.

Will USA Network cancel or renew Dare Me for season two? Netflix co-produces the show so they have first-run rights outside of the United States. That deal likely makes the show much less expensive for USA Network. So, right now, despite a big drop in the ratings, I suspect that the show will be renewed for a second season. I’ll update this page with breaking developments. Subscribe for free alerts on Dare Me cancellation or renewal news.

What do you think? Were you hoping that the Dare Me TV show would be renewed for a second season? Are you sorry that USA Network cancelled this TV series, instead?

I looked forward to this series every single week. I am devastated to know Dare Me is not going to be renewed…. how can this possibly be???! Every episode left me wanting more. I couldn’t wait to see the next episode. I think this is a GREAT show. Help me understand why such a great series is not renewed….time slot? Day of the week? I want this show back. Please bring Dare Me back!!!!

Please renew it! The book was amazing, and I wish more people knew about it both as a book and as a tv series. The actors are all amazing, especially Beth. Plus, the visuals of the show are just so amazing to look at, like all the colors and lighting and everything. Hopefully, another network picks it up, because I really want to see what happens after the plot of the book ends.

please renew it! i’m absolutely hooked on it and the ending of the first season has left me with so many questions!

Its a really good show but in today’s age of binging, it belongs on Netflix bc it moves too slow. They barely establish a plot until e.8 and its still murky. Teenagers don’t wait this long for stories to evolve and moddleagers have sh*t to do…speed it up before Dare Me ends up like The Killing (an awesome shiw that was cancelled twice bc fans got tired of waiting for the plot to unwind, Netflix picked it up and allowed the writer to give fans closure).

Plz renew it i freaking love this show❤️ i miss beth and addy a lot broo!!

Please, please renew Dare Me! This is amazing show that has kept me in suspense from episode one to the season finale! Please bring the next season back soon!

Renew!!! I watched since day 1 and was hooked! So many unanswered questions that could make season 2 more of a suspense!

I say RENEW Dare Me! I absolutely LOVE this show! Please renew! I vote Season 2!✨
❤

Dey shld pls renew it Abeg! Dey shld not even try to cancel it Biko

Please renew the new show Dare Me. I love this show and I know alot of other people do also. Facebook and Instagram are blowing up and there are more and more followers everyday. Please give it a chance. Don’t break the heart of the ones already hooked on it. Please make season 2…and 3…and etc. Thank you.