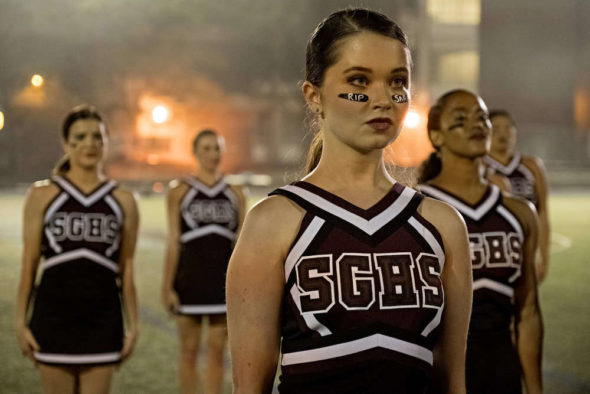 The high school drama won’t continue on the Dare Me TV show. USA Network has revealed that the series has been cancelled so there won’t be a second season.

The first season of Dare Me averaged a 0.13 rating in the 18-49 demographic and 402,000 viewers, making it one of the lowest-rated scripted shows on USA Network.

The cancellation comes as the cable channel moves toward producing unscripted programming and scripted limited series events.  Queen of the South has been renewed for a fifth season while the fates of Briarpatch, The Purge, The Sinner, and Treadstone. The second season of Dirty John debuts on June 2nd. The first season aired on Lifetime.

What do you think? Have you seen the Dare Me TV series? Would you have watched season two on USA Network?

A surprisingly good show- with excellent acting and strong gymnastic cheerleading scenes. Beth is a scene stealer and does an excellent job portraying a strong, yet damaged, female lead. My wife and I are older than the target demographic, but we really enjoyed the show and had looked forward to season 2. Disappointed about cancellation.

I really liked it as far as teens. But having the coach get involved in a girls life, or bringing her into hers was wrong. Kids cant deal with adult issues.. I was hoping the would continue and fire the coach or arrest her.

Dare me needs another season the show is awesome and I can’t wait to see how it ends. I hope you reconsider you shouldn’t leave the fans hanging like this again. This happen to Rush it was also a good show and the ended suddenly.

I would like to see a second season of the show. There are too many open endings to just leave it like that.

I liked that show. I believe that teens do just what they do, BUT I think that teacher is way out of line. she has brought a child into adult situations. so I was upset with the teacher now upset because it has been canceled. why cancel all the good shows. we just got into this understanding a little about them all. and you take it off. Thats just not right.

I agree. I made my comments but yours was better. And there were too many unanswered questions.

Oh nooo, I loved this so much! First season just ended when things started to happen. Couldn’t wait for season 2. Why are they keep cancelling all the good shows?

Could never get into the series, just seemed to drag it’s feet to much for me. Really want a 3rd season of The Purge, maybe a continuation of season 2 events.

Please do a second series!!

Another good show taken away! Ridiculous! Guess I’ll have to get the book on Kindle. Stupid network!

Definitely was hoping for season 2 am pretty upset

Maybe USA network should take the hint and create more light hearted dramas like Psych or Royal Pains. Their Blue Skies programming was successful yet they inexplicably chose to end that in favor of dark and gritty.

What about Netflix?! They own this show as well, I don’t know they will leave this or give it a chance like “You”.