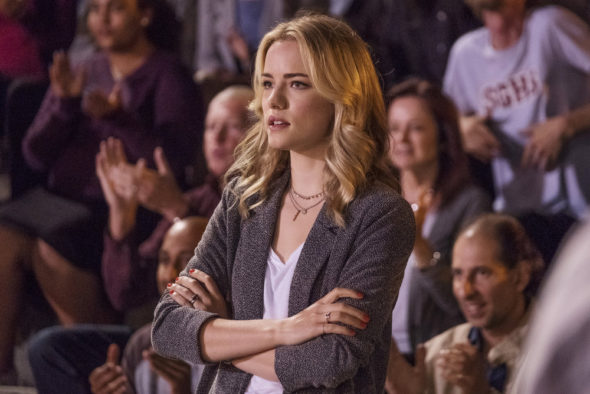 Can the girls’ friendship survive the first season of the Dare Me TV show on USA Network? As we all know, the Nielsen ratings typically play a big role in determining whether a TV show like Dare Me is cancelled or renewed for season two. Unfortunately, most of us do not live in Nielsen households. Because many viewers feel frustration when their viewing habits and opinions aren’t considered, we invite you to rate all of the first season episodes of Dare Me here. *Status update below.

A USA Network dramatic TV series, Dare Me is based on a novel by Megan Abbott and it stars Willa Fitzgerald, Herizen Guardiola, Marlo Kelly, Paul Fitzgerald, Zach Roerig, Rob Heaps, and Alison Thornton, with Chris Zylka, Taveeta Szymanowicz, Tammy Blanchard, Antonio J. Bell, and Amanda Brugel in recurring roles. The series explores the cutthroat world of competitive high school cheerleading in Sutton Grove, a small Midwestern town. It follows the fraught relationship between best friends Addy Hanlon (Guardiola) and Beth Cassidy (Kelly) after a new coach (Fitzgerald) arrives to bring their team to prominence. While the girls’ friendship is put to the test, their young lives are changed forever when a shocking crime rocks their quiet rust belt town.

What do you think? Which season one episodes of the Dare Me TV series do you rate as wonderful, terrible, or somewhere between? Do you think that Dare Me should be cancelled or renewed for a second season on USA Network? Don’t forget to vote, and share your thoughts, below.

Renew the show. Dare me is an awesome show.

Please renew Dare Me, this was a very suspensful TV show and want to see what happens next.

Please renew date me, I want season 2 out already the suspense is killing me. I love Beth I think she is amazing and she is such a great actress. I never ever watch series after pretty little liars was such a waste of time but this series is amazing and unlike anything I have ever watched! Please renew pleeeeeaaaasssssseeeee

Please renew it❤️Make season 2 ,I love this show so much, i miss beth and addy already 🙁

the show should continue for sure ..i liked the suspense and the twist at end .eager to see what happens..and the girls are great actresses..

It’s a little on the slow side, but it’s still good enough to keep you watching. It’s a lot better than some shows that are on the air. Besides, every show deserves a second season. You can’t judge a series off of 2 season, especially a show of this caliber. Shouldn’t have Addey so stupid though. Lol

Please renew Dare Me. This show is absolutely amazing. So different from other shows and I love being left in suspense.

We love this shoe! Please renew

I like this show and watch it with teen girl. Both of us relate to a lot of what happens with peer pressure, bullying, lies, promiscuity and competitive behavior.

I’m 60 & I luv this show! My daughters are older now but kids in school will always go through the same issues! It’s got drama it has its funny moments but most of all there is something we can all relate too!