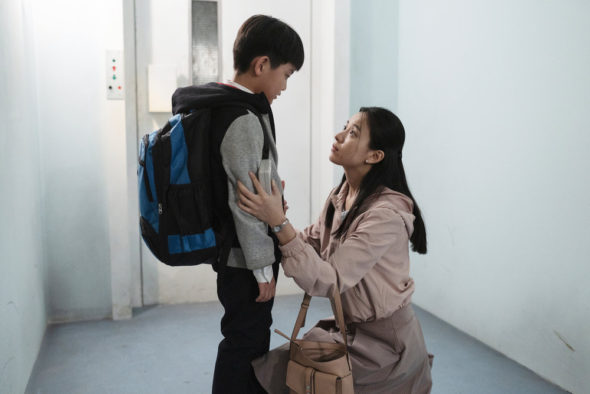 Can this show recruit enough viewers in the first season of USA Network’s Treadstone TV show? As we all know, the Nielsen ratings typically play a big role in determining whether a TV show like Treadstone is cancelled or renewed for season two. Unfortunately, most of us do not live in Nielsen households. Because many viewers feel frustration when their viewing habits and opinions aren’t considered, we invite you to rate all of the first season episodes of Treadstone here. *Status update below.

Characters include: Doug McKenna (Smith), an all-American oil-rig worker; SoYun Pak (Han), a piano instructor, wife, and mother in North Korea; John Randolph Bentley (Irvine), a spy dispatched by the CIA to eliminate a key target; Matt Edwards (Metwally), a CIA operative who has experience hunting down rogue assets; Tara Coleman (Ifeachor), an investigative journalist; Petra (Scharnitzky), a no-nonsense Russian patriot; Ellen Becker (Forbes), a savvy CIA veteran trying to balance the demands of work and family; and a Russian KGB agent (Emilia Schüle) who will stop at nothing to promote the agenda of her motherland.

What do you think? Which season one episodes of the Treadstone TV series do you rate as wonderful, terrible, or somewhere between? Do you think that Treadstone on USA Network should be cancelled or renewed for a second season? Don’t forget to vote, and share your thoughts, below.

*5/14/20 update: Treadstone has been cancelled by USA Network so, three won’t be a second season.

I am disappointed that treadstone was cancelled! It is a fantastic show, reminiscent of the bourne trilogy, which I have in my collection! Please bring a second season of treadstone for all of its fans!

I just was checking when 2nd season will air and found out its being cancelled. Pleaseeeeee dont cancel this show i was hooked and loved it. I love the characters and story line all of it. I was so excited to find a show like this. Please give us more seasons!!!!

This is a great series, I watched it all in one weekend it had me glued to my television. Please don’t cancel this series, at least for the viewers that are hooked you can have a 5 or 6 episode finally. Thanks

I like the show,its too good and waiting for 2nd series.

We absolutely love this TV series, which is based on the “Jason Bourne” movies, We’ve NOT MISSED any of the movies, & we have seen the ENTIRE first season of the TV series! PLEASE PLEASE DON’T CANCEL THIS SERIES! We are desperate to see what happens and where it goes. In our opinion, the 1st season, the only one to air so far, HAS US HOOKED! WE ARE SICK & TIRED of these “so-called reality” shows & therefore we NEVER WATCH ANY OF THEM! We don’t give a crap about the “Bachelor & Bachelorette GARBAGE SHOWS, nor ANY of the… Read more »

I think the show is great please renew it

Loved the series and I don’t watch many but Treadstone got me hooked. Keep it!

I like the series to the most ,we need season 2 release don’t cancel

Loved the series. Can’t wait to have a season 2!!!
Please don’t cancel

Treadstone is AWESOME!!!!!! They have to bring the show back!!!! They can’t leave us hanging like this!!!!!

I really liked this show. It kept moving and was fresh, you never knew what to expect, or who was coming back. Sometimes it took awhile to figure out if it was past or present, or how many missions were ongoing. But it is similar to Taken which was 1 of my all time favorite shows, and I wish they’d bring that one back. Anyway, I hope they renew this one, totally captivating!