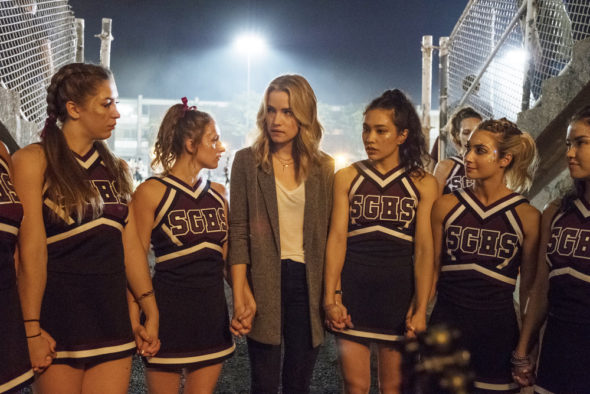 TV show description:
A dramatic TV series that’s based on a novel by Megan Abbott, Dare Me explores the cutthroat world of competitive high school cheerleading in Sutton Grove, a small Midwestern town.

It follows the fraught relationship between best friends Addy Hanlon (Guardiola) and Beth Cassidy (Kelly) after a new coach (Fitzgerald) arrives to bring their team to prominence. While the girls’ friendship is put to the test, their young lives are changed forever when a shocking crime rocks their quiet rust belt town.

What do you think? Do you like the Dare Me TV show? Do you think it should have been cancelled instead of renewed for a second season?

This was a great series that I was really hoping for a second season. The book was a beast seller so you know the show has to be good. The acting was great, I loved the girl playing Beth! I was hoping since Netflix added it maybe they were picking the show up for a second season

Please just cancel and save everyone

this is the dumbest, most boring “new” shows ever, theres nothing watchable about it.