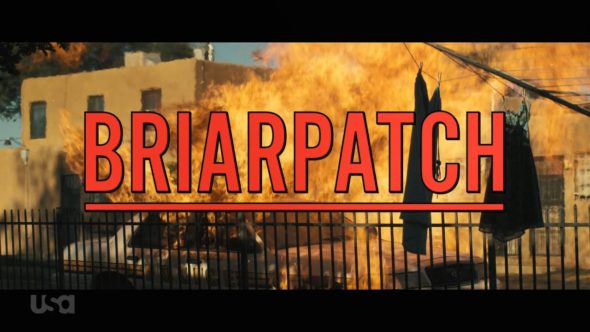 Deadline revealed that the move will start with the Monday, February 24th episode. Andy Greenwald said the following about the move on social media:

“Apparently this has more to do with the popularity of wrestling than it does anything else – so I’m very happy to welcome our new kayfabe friends aboard!”

Briarpatch saw a significant drop from its premiere to week two, so USA Network is hoping the move will help improve ratings.

What do you think? Are you a fan of this series? Will you watch it on its new night?

I love the show so much intrigue and deception. Will definitely continue to watch

Why not put the show on at 4 AM? Who is the moron that would take a show with star power and start the show when most working people need to hit the sack?

New time slot for Briarpatch is ridiculous and asinine!
The USA Program Durector is either the dumbest usa employee or he has orders to kill the show.
What a moron
he is lucky to have a job

Yes keep the series on and renew. The is quirky and different from your normal drama series. Leave it on please

Love the show. Terrific in every way. Will certainly watch on whatever night is chosen.

Yes I will watch on new night.

I will watch it on Monday at the new day and time.

I love the show! Please do not take it off the air! Watching episode 3 on “On Demand “ right now.

I am done watching. When networks start moving show’s to new night’s or time’s I quit watching. It is the kiss of death for show’s.

I think this show really needs improvement! I liked the Pilot but then episode 2 really was so stupid! I won’t watch it, no matter when it’s on!