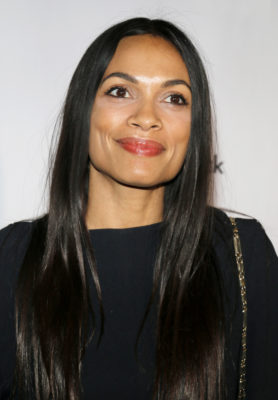 USA Network has not yet announced a premiere date for Briarpatch, but you can read more info below:

NEW YORK, NY – January 24, 2019 – USA Network has picked up UCP and Paramount Television’s new anthology drama series, with the first season titled BRIARPATCH. Starring Rosario Dawson (“Rent,” “Seven Pounds”), the first season is based on the Ross Thomas novel of the same name. It is written for television by Andy Greenwald, who will executive produce, along with MR. ROBOT creator Sam Esmail through his production company Esmail Corp, and Anonymous Content’s Chad Hamilton. Ana Lily Amirpour directed the pilot and also served as an executive producer. In addition to her starring role, Dawson will serve as a producer onBRIARPATCH.

BRIARPATCH follows Allegra Dill (Dawson), a dogged investigator returning to her border-town Texas home after her sister is murdered. What begins as a search for a killer turns into an all-consuming fight to bring her corrupt hometown to its knees. The seasoncelebrates the beloved genres represented by Thomas’ book — a stylish blend of crime and pulp fiction — while updating his sense of fun, danger and place for a new generation.

“When we were first introduced to the anthology by Andy Greenwald, UCP and Paramount Television, we were immediately struck by the show’s unique tone and captivating story,” said Chris McCumber, President, Entertainment Networks for NBCUniversal Cable Entertainment. “And Sam Esmail’s incomparable vision and style, coupled with Rosario Dawson’s tremendous performance as Allegra Dill, will no doubt leave audiences buzzing.”

Greenwald will join Esmail on UCP’s roster of overall deals, developing and producing premium scripted content for cable and streamers. With UCP, Esmail serves as creator, showrunner and director of USA’s MR. ROBOT, which will return for its fourth and final season later this year. Esmail is also developing a limited series based on Fritz Lang’s sci-fi classic METROPOLIS. Most recently for UCP, he directed and executive produced Amazon’s Golden Globe® award nominated HOMECOMING, based on the podcast of the same name, starring Julia Roberts, Stephan James and Bobby Cannavale.”

What do you think? Are you a fan of Rosario Dawson? Will you watch her new series?

YES! I will definitely watch the series….and, my husband and I will be dancing during one of the scenes.

Rosario has had some of the best shows lately, she deserves another one of those, no matter the genre. Will start watching Briarpatch as soon as possible.