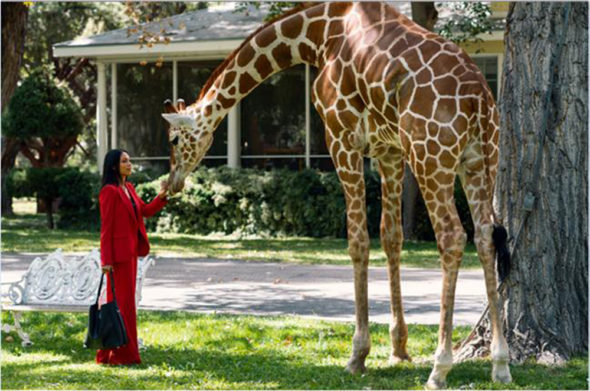 The fight for justice is over — at least, on one USA Network series. The creator of the Briarpatch TV show has revealed that his series has been cancelled by the cable channel and teased that he had great plans for a second season.

The first season of Briarpatch averaged a 0.14 rating in the 18-49 demographic and 487,000 viewers. Compared to other USA Network scripted series, Briarpatch was a middle-of-the-road performer. The show looked to be on shaky ground when, after two episodes, the cable channel shifted the Thursday night series from the 10:00 PM timeslot to the 11:00 PM timeslot, out of primetime.

Showrunner/creator Andy Greenwald broke the news of the cancellation on Twitter. 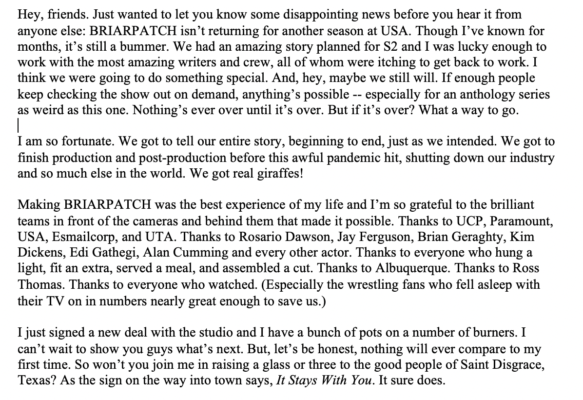 What do you think? Have you seen Briarpatch? Would you have watched season two of this USA Network series?

OMG!! Now they’ve also taken Briarpatch off the air!! SMH! 68 Whiskey and Briarpatch were absolutely 2 of the very best adult shows on TV! So disappointing that the mediocre and foolish uninteresting shows go on and on and on!!! Troubling!

Yeah I didn’t even hear of it until after it was cancelled and I’m a Rosario fan. Poor marketing.

It took a couple episodes to catch my attention, but it was worth the watch. Sorry to hear it won’t have a 2nd season, I was hooked!

USA should have taken a chance on this one. It was uneven, but VERY interesting. I was looking forward to a second season.

USA will soon be nothing but repeat Law and Order episodes, Chrisley, and Wrestling.
Loved Burn Notice, Covert Affairs, Graceland, but now they are lucky if they break 1 million viewers with any of the new shows.
Just Sad!

Yeah; That’s one thing I’ve enjoyed about USA. Writers & fans on many sites seem to complain &/or argue about scripted versus reality, whereas USA seems to often do well with either/both (though I wouldn’t include this show among examples).

Since USA is part of the Scumcast media megaopoly, I would think this could very easily be picked up by the new Peacock platform as an original streaming series.

Or failing that, maybe Rosario Dawson could make some calls to Netflix. It’s the least they could do for her after they mercilessly slaughtered all those Marvel series she appeared in,

Thought it was great; sorry to hear there will be no season 2

We are older than the desired demographics, but we really enjoyed it!