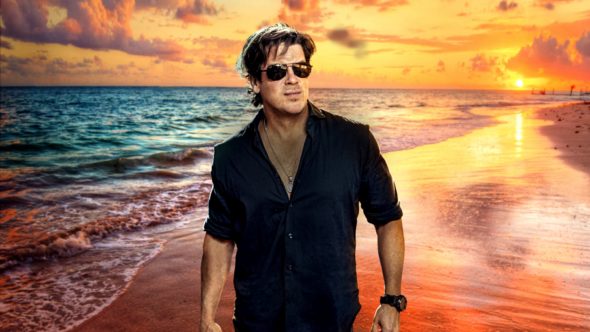 What’s next for Almost Paradise? Recently, executive producer Dean Devlin spoke with TV Tango about the future of the TV show.

The crime drama, which previously aired on WGN America, revolves around a former DEA agent, Alex Walker (Christian Kane), who’s been forced into retirement. He moves to the Filipino island of Cebu and purchases a hotel gift shop, planning to live a tranquil and less stressful life. Unfortunately, the island’s luxury resorts attract rich, powerful, and sometimes criminal elite from around the world, often on a collision course with Alex. The cast also includes Samantha Richelle, Arthur Acuña, Nonie Buencamino, and Ces Quesada.

Last month, we reported WGN America was not picking Almost Paradise up for a second season. However, EP Dean Devlin says he has plans for another season of the series:

The big police bureau in Manila, mentioned a lot particularly by Ocampo, will become a presence in Season 2. And you’ll see Ocampo’s ambition go up. He has ambition but he is a seeker of justice. Ocampo wants to do good but he has a delicate ego. He’s not a villain; he’s just complicated. But you can rest assured if things aren’t going his way he’s going to put pressure on his officers. Alex’s reason for going to the island is to heal. In the finale, we see that he’s made progress, both with the friends he’s made and healing from the betrayal of his old partner. Alex doesn’t need the DEA.”

Additionally, Devlin says there will be more development for the side characters in Almost Paradise:

We’ll also see more of our already established side characters. As I said before about Filipino actors showing their talent, there are characters we wanted to expand because of their actors’ performances. Like Cory (Ces Quesada) and Rita (Sophia Reola)A – they’ve made quite an impact in front of the camera with the main cast so we feel they’re deserving of more story in the second season.”

So will there officially be a second season? Devlin says they should know more by October:

We should know more about Season 2 by October. If we get a second season, we would probably start shooting again sometime in February 2021.”

What do you think? Have you seen Almost Paradise? Will you watch season two?

Absolutely great show all the way around!

Please bring it back. Great show, great characters! I love it.!

Yes I will definitely watch!

It is a great show. I would like to see another season.

Bring it BACK! RIGHT NOW.

Almost Paradise is the best show on Television! I don’t understand why it hasn’t been nominated for the Golden Globe and other awards.

Yes please, we would totally watch another season of this show.