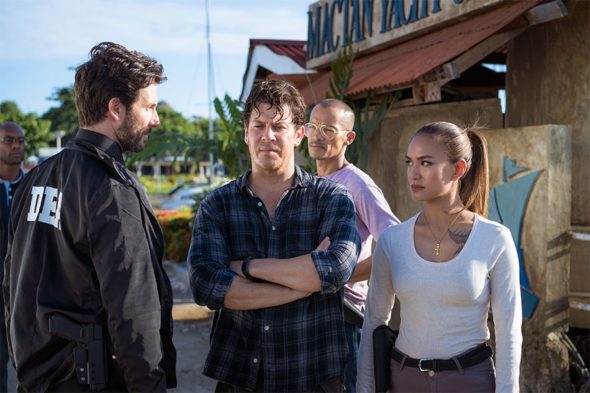 On Monday night, WGN America finished airing the first season of the Almost Paradise TV series. Tonight, the show’s creator, Dean Devlin, shared with his cast and crew that series won’t be returning to the cable channel for another season. However, that doesn’t mean that the series has been cancelled either. The possibility for a second season is still alive.

A crime drama series, Almost Paradise stars Christian Kane, Samantha Richelle, Arthur Acuña, Nonie Buencamino, and Ces Quesada. The series revolves around a former DEA agent, Alex Walker (Kane), who’s been forced into retirement. He moves to the Filipino island of Cebu and purchases a hotel gift shop, planning to live a tranquil and less stressful life. Unfortunately, the island’s luxury resorts attract rich, powerful, and sometimes criminal elite from around the world, often on a collision course with Alex.

Devlin has already discussed some plans that he has for the second season but first, the show must be renewed. Tonight, Devlin said, “A lot of people have been asking about season two so I want to tell everybody what’s happening with our show. Just so everyone knows we will not be back on WGN next year. WGN has decided to change into an all-news network [in primetime]. We are grateful to WGN for launching our show and for getting us up and running and giving us a place to show the show to everyone. So, thank you for that opportunity. But, we will not be back next year with WGN but that does not mean that we will not be back.”

He continued, “I can’t name the platform yet because the ink isn’t dry on the contract but, this July, all of the original episodes will appear in a new place and that place will be for free so everyone will be able to watch it for free.”

“And, they have sworn to me that, if we do well enough, if we perform really well in those first couple months, they will pick up season two and continue the show. We will announce at some point where that new platform is,” Devlin said.

“If we do well, we will be back for season two and nothing would make me happier. I can’t imagine any show that I’ve ever worked on being more fun than this one. Again, thank you, everyone, for a wonderful season,” he concluded.

What do you think? Are you a fan of the Almost Paradise TV series? Will you be watching the first season episodes in support? Should this series have a second season?

I just found this show and I love it!!! Can’t wait for Season 2. Where can we watch it??

I just discovered the series and I love it. Please do another season.

Love it! Love it!Love it!
Action! Humor! Good over evil!

I hope there will be a season 3

I loved this series! It was fun and unique with just the right blend of crime, drama and comedy, filmed in a beautiful location. Christian Kane was great as the lead! I also loved the main Filipino cast. I’ve watched season 1 over and over again. Please give us season 2 quickly! Don’t let this series die…..

Another great show cancelled my daughter and I watched this together. I hope someone picks it up. Not everything has to be Law and order.

Would love to see season 2 happen

We love this show and all the characters, and we hope someone brings it back.

Love Almost Paradise. Me and my husband have recently starting watching it. This show is right up our alley. Crime, drama and comedy.

Love this series. My son and I are hopeful that it’ll have many more seasons.