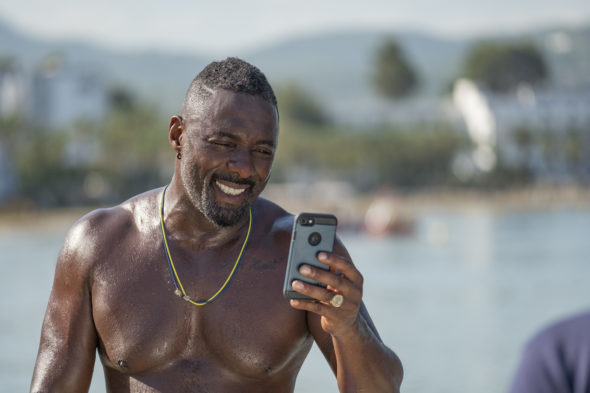 TV show description:
From creators Idris Elba and Gary Reich, the Turn Up Charlie TV show is a comedy centering on a man-child DJ, named Charlie (Elba). Once upon a time, a long time ago (i.e. the 1990s), Charlie had a big hit and seemed poised to hit it big. Instead, he wound up on the list of unfulfilled promises — a washed-up one-hit wonder.

Back home in Nigeria, his parents still think he’s a superstar, probably because he lets them. In reality, this eternal playboy mostly earns his keep as a wedding DJ.

Charlie’s best friend, David (Feild), meanwhile, is actually famous, as is his successful DJ-wife, Sara (Perabo). Now Charlie’s working as the “manny” for their handful of a daughter, Gabrielle (Hervey). Will he ever get another chance to make more of himself? If he does, can he make the most of it? Stay tuned.

Series Finale:
Episode #8
A wild night and a romantic gesture stir up drama as everyone gathers for a life-changing weekend in Ibiza.
First aired: March 15, 2019.

What do you think? Do you like the Turn Up Charlie TV series? Should this Netflix TV show have been cancelled or renewed for a second season?

I was disappointed. I love Idris Elba in Luther, but this family show comedy had more mature themes than Luther. In the first minute there was the F word and drug use and shortly after the child, who I believe is supposed to be 10, is running around with a sex toy and knows exactly what it is. It could have been cute, but it’s not for me or for families with children watching.

i saw the title and thought this was going to be a new series that kept up the Good Lucky Charlie series, but centering on Charlie herself. Imagine my deep disappointment in finding it was just more trash TV.