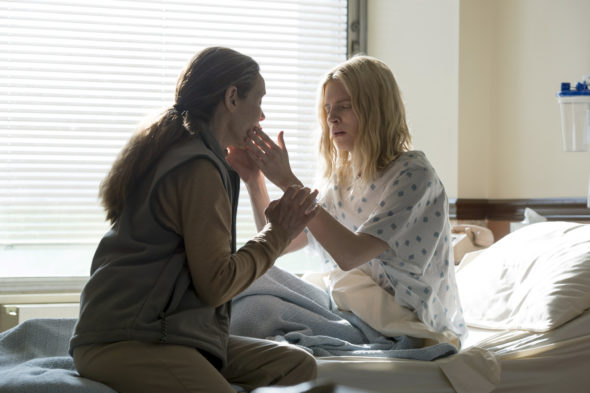 TV show description:
From creators Brit Marling and Zal Batmanglij, who star and direct (respectively), The OA TV show is a science-fiction mystery drama with a supernatural bent. The story centers on Prairie Johnson (Marling), an adopted young woman who is blind when she goes missing. Several years later, she returns to the community in which she grew up, with her vision restored.

Upon her return, Prairie refers to herself as “The OA,” and refuses to reveal to her family, or to law enforcement, where she has been all this time. Instead, she builds a team of community members, tells them her tale, explains her new abilities, and asks for their help to save other people.

Series Finale:
Episode #16 — Chapter 8: Overview
While BBA and the others converge on the clinic, Nina persuades Hap to show her his research, and Karim unlocks one of the house’s final secrets.
First aired: March 22, 2019.

What do you think? Do you like The OA TV series? Should this Netflix TV show have been cancelled or renewed for a third season?

Just watched this show and it blew my mind. Now my brother, sister, and my cousin are watching it now. They’re so excited but they will be destroyed when they find out its no season 3. Bring OA back now

One of the few shows on the boob tube that makes you use your brain and imagination. Of course it was bound to be canceled.

Just discovered the series on Netflix and watched the 2 seasons in record time, never seen such brilliant writing, very creative, a gem of a series.

Absolutely LIVID that this was cancelled. The writing was beyond its time and the story gripped me like a Sentient Alien from across the cosmos. The characters so strong in their humanity I felt like I was with them every step. This Story deserves to be told in full. Anyone who says otherwise hasn’t watched it!

WHY did they cancel this fantastic show? It has so much more to give. Please Netflix, give us another season!

The OA should have been renewed for season 3. Sucks that it got cancelled. This is such a great show. It has so much potential. Netflix you suck for cancelling The OA!

I agree. This show should not have been cancelled.

Please Renew!!!! Love this show. so well done <3
Is there any chance there will be a series 3 and 4? EXCELLENT STORY

Very intriguing series, woukd very nuch like to see the 2nd season to see how or if she goes into a different place.