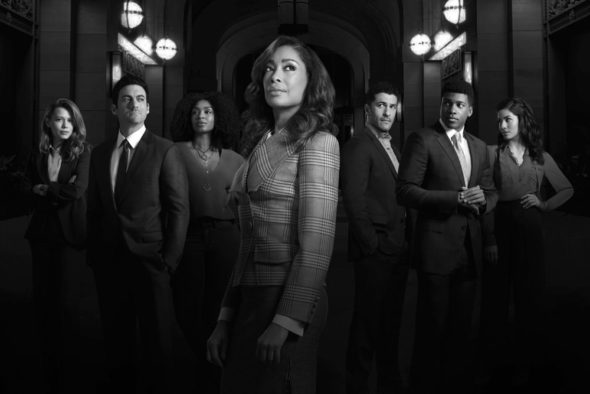 TV show description:
From Aaron Korsh and Daniel Arkin, the Pearson TV show is a spinoff of the long-running USA drama, Suits. The political and legal drama centers on Jessica Pearson (Torres) who, after being disbarred, left New York City for the rough and tumble world of Chicago politics.

In the Windy City, Jessica serves as the fixer for Chicago’s working-class Mayor Bobby Novak (Spector). Bobby is up for reelection soon, which ratchets up the tension. Thanks to the dirty nature of the business, it is not long before Jessica finds herself in the center of a corrupt world, where everything someone does has the potential to affect a whole lot of people and create tremendous fallout.

As ever, Jessica has a fiercely competitive spirit and is driven to win. These days though, she is trying to reconcile that aspect of her nature with her goal of doing the right thing — even though the two sometimes seem utterly reconcilable.

Series Finale:
Episode #10 — The Fixer
Jessica is split between her personal and professional life; Keri comes to a decision about her future.
First aired: September 18, 2019.


What do you think? Do you like Pearson TV series? Should this USA Network TV show have been cancelled or renewed for a second season?

Please bring Pearson back. We loved the show.

We enjoyed the show very much. This show should haved stayed on.

Thus us an amazing show!! Please renew this show, I looked forward to watching this show every week!!

I just binge watched all 10 episodes and love the show, hope they renew the show

Although this show is not Suits it definitely has its own personality and a bit more grit. I’m disappointed to see that it wasn’t given the chance to mature into its own. I think USA Network needs to revisit its decision. There are too many unexplored storylines that even I, you’re average TV show fanatic, could see were primed for development in future episodes/seasons. 40 lashes with a wet noodle to you USA programming!! I’m sure Harvey and Mike would’ve found a legal reason to litigate that decision. Hmmmmmm…..